Filip Hronek and Anthony Mantha turned in some great games while new acquisition Oliwer Kaski got himself a deal with his solid play.

Hronek had gotten more playing time later in the season as Detroit let its younger players get more time. There was growth, but there were also times that he showed he was a rookie. However, the young Czech Republic blueliner picked up three goals and eight assists in 10 games to earn the top defenceman award.

He looked poised and made great decisions for his home country to guide them to fourth place. Hronek made his case to get more minutes next season for a Detroit defence that’s transitioning away from being mostly veteran.

Mantha was a pivotal figure in Team Canada winning the silver medal. He had seven goals and seven assists for 14 points in nine games. The 24-year-old also threw his weight around. He was suspended for his hit on Team USA’s Colin Miller, but you could see Mantha embrace all aspects of his game.

The growth of Mantha’s game at the World Championships is similar to what Larkin did two seasons ago.

Larkin posted three goals and two assists for five points in seven games. He did leave the Americans’ 3-0 loss to Canada, but should be ready to go for the start of the season. The Waterford Township, Michigan native may have not have filled up the stat sheet, but he was a solid leader for Team USA.

Kaski was coveted by Detroit for a while, but he made his case for a deal at the tournament. The Finnish defenceman added to the gold-medal winning squad.

The young 23-year-old registered two assists but showed that he could shoot the puck. He showed that he was good at one-timing pucks and was willing to fire the puck in any situation.

The Red Wings power play struggled at times last season. However, Kaski showed that he was an asset on the man-up unit. Kaski might make the team based off of that asset.

The IIHF Worlds can be treated as a consolation prize for teams that miss the post-season. However, teams can build off it for their future. The Nashville Predators did that at the start of their most recent string of good seasons.

Detroit still has a long way to go, but the play of their younger skaters is an encouraging sign. These young players will get plenty of chances next season. Seeing these players thrive against some of the best players in the world is a step forward. 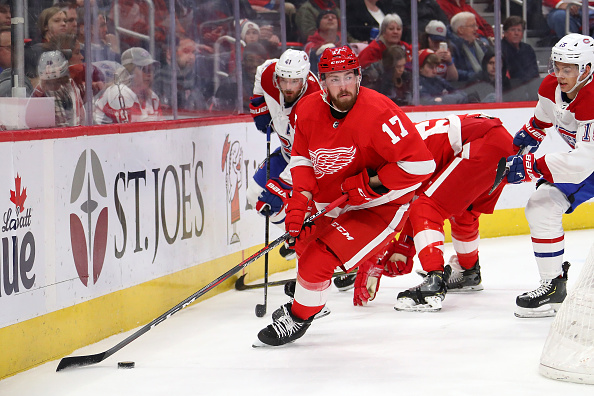 DETROIT, MICHIGAN – FEBRUARY 26: Filip Hronek #17 of the Detroit Red Wings looks to head up ice in front of Paul Byron #41 of the Montreal Canadiens during the first period at Little Caesars Arena on February 26, 2019 in Detroit, Michigan. (Photo by Gregory Shamus/Getty Images)