Is Ice Hockey Betting Really the Hardest Market to Master?

Betting on ice hockey is incredibly popular in North America and Europe, especially when it comes to the National Hockey League (NHL) and Continental Hockey League (KHL). There are also large international tournaments that are played regularly.

The most significant ice hockey tournaments and competitions include:

With each ice hockey matchup, there are dozens of ways to bet. That provides entertainment for millions of people interested in gambling.

How To Bet On Ice Hockey

Before you can successfully bet on ice hockey, you will need at least a basic understanding of how the sport is played. While some of the best ice hockey betting sites, like the ones featured on this page, make it easy to place bets, it is always a good idea to educate yourself before wagering money.

Understanding The Game Of Ice Hockey

First and foremost, you should know that the ultimate objective of ice hockey is to score more than the opposing team. Two teams compete in an ice hockey match, with six players competing for each team, including one goaltender for each team.

Because ice hockey is a high-contact sport that gets very physical, a typical roster includes 20 players. There are unlimited substitutions during an ice hockey match.

A shootout is when one skater on a team faces the opposing team’s goaltender one-on-one. If the skater scores, they get a point. Each team is allotted three shooters in a shootout. The team with the most points after the shootout wins the game. If the score is still tied, the shootout goes to sudden death.

While the types of bets you can make vary depending on the site you visit, most sports betting sites offer the following:

Money line betting is pretty straightforward: it refers to betting on which team will win the match. When you make a money line bet, you can see how much you can potentially win, as well as the favorite and underdog.

Handicap betting is available when there is one ice hockey team that is heavily favored over the opposing team. To keep the event competitive for bettors, a bookmaker can offer a handicap on the number of points in the winning margin.

When you place a total goals bet, you are guessing how many total goals will be scored in the match. That includes goals scored by both teams. These bets are typically placed in an over/under format.

Just like with the total goals bet, many sports betting sites allow you to make a total goals bet that includes overtime. In most cases, your bet is still valid even if the match does not go into overtime.

Many betting sites also offer proposition bets, or prop bets. These bets are based around performance statistics, or how well a player or team performs in the match.

Some examples of prop bets include who will score the first goal of the game, how many goals a specific player will score, how many penalties a team will get, and so on.

Avid fans are ice hockey, especially those who enjoy partaking in betting on the sport, are almost always equally mesmerized and confused by the lack of interest in their sport. Not that ice hockey isn’t favored and enjoyed by millions of people. However, it it certainly doesn’t have anything close to the same fan base as other sports.

It is precisely that lack of interest that results in fewer bets being made on ice hockey games. Especially in the United States and Europe, you are far more likely to see a different sport on TV, which means ice hockey doesn’t have nearly the same visibility.

While some may consider ice hockey betting to be the most difficult market to master, many point out that perception is key. With so many sports betting apps offering bonuses and promotions, as well as numerous betting types, there are endless ways to increase interest in betting on ice hockey.

Ice hockey is a game that can easily pull you in if you give it a chance. While viewership may be highest during the Stanley Cup, betting sites can utilize the competition as a way to draw in more and newer bettors. Once more people are interested in the actual sport of ice hockey. It’s only natural that the number of people betting on ice hockey will increase.

Whether you have been a fan of ice hockey for years or enjoy trying your luck with sports betting, ice hockey has the potential to be the next big thing in the industry.

By creating more opportunities for ice hockey to be enjoyed, and with the help of betting promotions, betting on ice hockey can become more accessible for individuals looking for a hobby. As any passionate ice hockey fan will tell you, there are numerous opportunities to learn more about the game and take part in the excitement of sports betting during a match. 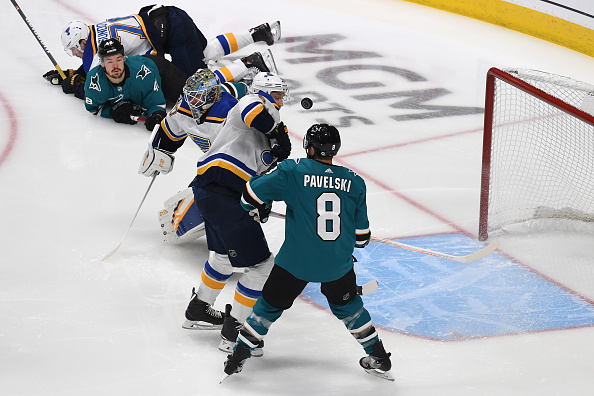 SAN JOSE, CALIFORNIA – MAY 19: The puck flies past Jay Bouwmeester #19 of the St. Louis Blues and Joe Pavelski #8 of the San Jose Sharks in Game Five of the Western Conference Final at SAP Center on May 19, 2019 in San Jose, California. (Photo by Thearon W. Henderson/Getty Images)