Carl Gunnarsson scored three minutes, 51 seconds into overtime as the St. Louis Blues beat the Boston Bruins, 3-2, in overtime. The Blues have tied the best-of-seven series at one game apiece. Boston had its eight-game post-season winning streak snapped with the loss.

Game 3 will be 8 p.m. ET Saturday night in St. Louis at the Enterprise Center.

The goals were flying in the first period as the four goals were scored in the opening period. There was no feeling out process as Charlie Coyle opened the scoring before Robert Bortuzzo tied it up just under five minutes later.

Joakim Nordstrom didn’t waste any time giving the Bruins the lead back just 40 seconds later. However, the Blues knotted the game at 2-2 after Vladimir Tarasenko beat Tuukka Rask. The Russian stuck with it and

St. Louis didn’t look intimidated after being overwhelmed in the second period of Game 1. It went after Boston with the body and matched their physical play. The hits were plenty from both teams throughout the game. Patrick Maroon caused problems which led to the first Blues goal.

A Scoreless Second and Third

The goals dried up in the second period for a good while. Both teams had chances, but no one could break the deadlock.

A high-sticking double-minor to Connor Clifton opened the door for St. Louis. However, some great penalty-killng and a Jaden Schwartz goaltender interference penalty took care of that. Boston had a shorthanded chance, but St. Louis was able to scramble back and recover.

The third period also didn’t have any goal as Jordan Binnington and Tuukka Rask made some key stops. Binnington withstood a late Bruins’ power play after Brayden Schenn was put in the box for a slashing call.

The Blues got on the Bruins early in the overtime session and didn’t let up. St. Louis got the extra skater on with a delayed call and Gunnarsson scored his first career playoff goal ringing one off the post. Rask was under relentless pressure during the overtime period and the Blues had chances to finish it off early.

Gunnarsson may not have been in the lineup if Vince Dunn was able to play. However, the Swede was able to make the most of his opportunity. St. Louis got the job done of getting at least one game in Boston and taking home ice advantage. 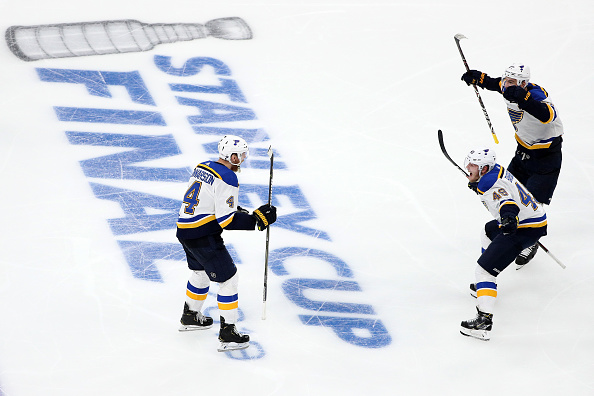 BOSTON, MASSACHUSETTS – MAY 29: Carl Gunnarsson #4 of the St. Louis Blues is congratulated by his teammates Ivan Barbashev #49 and Alex Pietrangelo #27 after scoring the game winning goal during the first overtime period against the Boston Bruins in Game Two of the 2019 NHL Stanley Cup Final at TD Garden on May 29, 2019 in Boston, Massachusetts. (Photo by Patrick Smith/Getty Images)