The Ottawa Senators have named D.J. Smith as the team’s new head coach. He signed a three-year deal with the team. Financials of the deal have not yet been disclosed.

Last season, the team had a record of 29-47-6 and finished in the last spot in the Atlantic Division. Marc Crawford finished the year behind the bench for the Sens last season after Guy Boucher was fired on March 1st. This move confirms Crawford will not be retained.

Smith most recently has spent time as the assistant coach of the Toronto Maple Leafs over the past four years. He started his career in the OHL with the Windsor Spitfires where he spent six years as an assistant coach. The Spitfires would win back-to-back OHL championships in 2009 and 2010.  Before joining the Leafs, Smith spent three years as head coach of the Oshawa Generals. In three years with the Generals, he went 135-53-3-13. The Generals would end up winning the OHL championship and Memorial Cup during the 2014-15 season. Smith was named coach of the year in the OHL during the 2013-14 season.

Smith had a very short NHL career playing in only 41 games recording one goal and one assist for two points during that time.

The gig in Ottawa for Smith is his first NHL head coaching job. He will look to take his previous success in Oshawa and translate into the Sens game plan for next season. Smith has proven to be a good head coach in the OHL and hopefully, that translates over. He has a lot of young pieces to work with on the Sens including Brady Tkachuk, Anthony Duclair, and Jean-Gabriel Pageau.

It may take time to get the Sens back on track but expect Smith to get this team back to their winning ways over the course of his three-year deal. 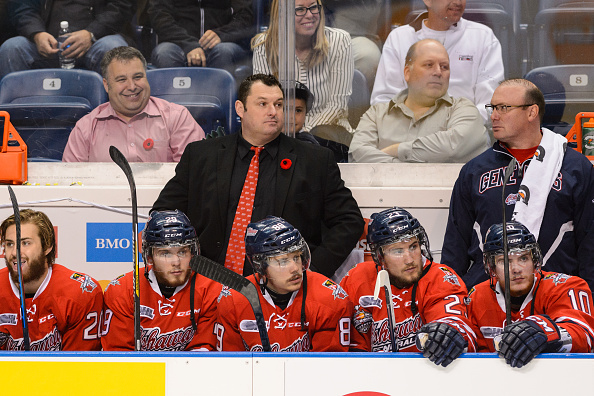 QUEBEC CITY, QC – MAY 31: Head coach D.J. Smith of the Oshawa Generals looks on during the 2015 Memorial Cup Championship against the Kelowna Rockets at the Pepsi Coliseum on May 31, 2015 in Quebec City, Quebec, Canada. The Oshawa Generals defeated the Kelowna Rockets 2-1 in overtime to become the 2015 Memorial Cup Champions. (Photo by Minas Panagiotakis/Getty Images)