Former Los Angeles Kings defenceman Slava Voynov will have his suspension lifted mid-season after a ruling by an arbitrator on Thursday. The Los Angeles Kings suspended Voynov in Oct. 2014 after a domestic violence incident.

The NHL Players Association appealed the suspension and Shyam Das made the ruling. League commisioner Gary Bettman said that Voynov would be suspended for the entirety of the 2019-20 season and the Stanley Cup playoffs.Voynov had applied for reinstatement earlier in the year.

Voynov got “credit” for serving 41 games of the suspension. He can return at the mid-way point of the next season. The Kings released a statement saying that Voynov will never play for the club again. Los Angeles terminated his contract and placed him on the voluntary retirement list.

“Today the NHL arbitrator rendered a final decision on further discipline to Slava Voynov. From our perspective, the player will not be playing for the Kings. We will now determine the impact of the arbitrator’s decision on our rights to the player and consider our options going forward.”

He’s played in the KHL with SKA St. Petersburg the last three seasons and won a Gagarin Cup in 2017.

Voynov will eligible to return to the league and could find a way onto a roster desperate to improve their defence. However, any team that signs him will face a backlash because of Voynov’s past actions.

The league may also look at its domestic violence policy because it’s the only four of the major North American sports league without a uniform policy. Incidents are on a case-by-case basis. Punishment is then determined by Bettman. 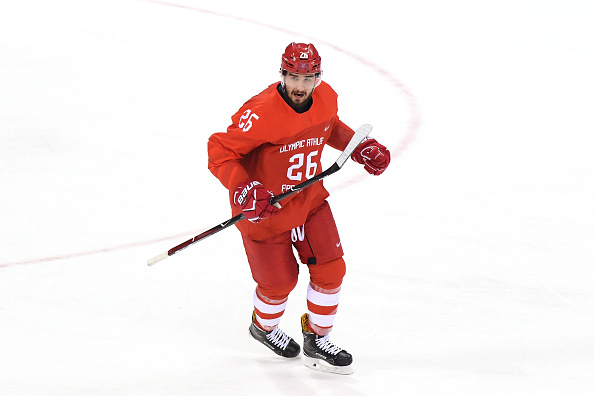 GANGNEUNG, SOUTH KOREA – FEBRUARY 25: Slava Voynov #26 of Olympic Athlete from Russia celebrates after a goal in the first period against Germany during the Men’s Gold Medal Game on day sixteen of the PyeongChang 2018 Winter Olympic Games at Gangneung Hockey Centre on February 25, 2018 in Gangneung, South Korea. (Photo by Harry How/Getty Images)