The St. Louis Blues are one game away from their first Stanley Cup Final in 49 years after routing the San Jose Sharks, 5-0, in Game 5 of the Western Conference Final. St. Louis leads the best-of-five series three games to two after Jaden Schwartz notched a hat trick.

Jordan Binnington got the shutout with 21 saves and Vladimir Tarasenko scored on a penalty shot and added two assists for St. Louis. San Jose goalie Martin Jones was under siege most of the game after facing 40 shots. He made 35 saves for the Sharks.

The 26-year-old got his second hat trick of the post-season to reach 12. He’s already surpassed his regular-season total of 11 in the playoffs. The Wilcox, Saskatchewan native has been on a tear as his 12 goals have come in just 18 playoff games.

Jaden Schwartz is the first player in @StLouisBlues history to score multiple hat tricks in a postseason and first on any team to do so since Johan Franzen in 2008 (w/ DET). #NHLStats #StanleyCup pic.twitter.com/7Ow997VEcI

The centre has caught fire and tossed his name into the mix for the Conn Smythe Trophy. Schwartz has come alive much like the club has since the beginning of the New Year.

San Jose was not just knocked around on the scoreboard, but it took a beating on the ice. Key players such as Erik Karlsson, Tomas Hertl and Joe Pavelski all left Game 5 and did not come back. Joonas Donskoi and Micheal Haley were also dinged up during the game.

Karlsson and Pavelski were already going through injury troubles and Game 5 did not help. Hertl has been an important player this post-season for San Jose.

Losing any of these players could make it an impossible order for the Sharks to win two straight games and reach their second Stanley Cup Final. San Jose may have to call on some reinforcements if they want to stay alive in the series.

One Step Away for St. Louis

St. Louis has been singing the blues for most of its playoff history. The team hasn’t made the Final since 1970, where it was swept by the Boston Bruins.

It’s been nothing but heartache for nearly five decades for the Blues. However, a win in one of their next two games will give them that elusive Final appearance.

Alex Steen told the media after the game that “We’re playing our brand of hockey.” St. Louis is a much different team that was in the basement of the Central Division earlier in the season. The Blues already have cemented one of the best single-season turnarounds in league history. Making the Stanley Cup Final would put it close to the top of the list.

Blues fans still won’t count their chickens, but they should be amazed of what their team has done. 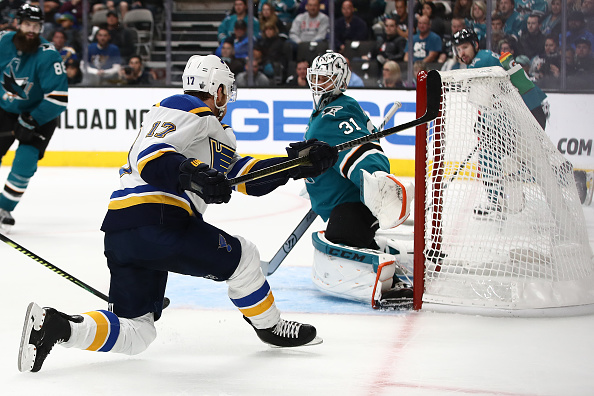 SAN JOSE, CALIFORNIA – MAY 19: Jaden Schwartz #17 of the St. Louis Blues scores his third goal against the San Jose Sharks in Game Five of the Western Conference Final during the 2019 NHL Stanley Cup Playoffs at SAP Center on May 19, 2019 in San Jose, California. (Photo by Ezra Shaw/Getty Images)