It’s time for another dose of NHL rumours as we march toward the end of the Stanley Cup playoffs. Teams are trying to set their plans to keep or move players. Change is on the horizon and we try to keep fans ahead of the curve. We take a look at rumours involving the Dallas Stars, Montreal Canadiens, and the Detroit Red Wings.

Rumour: Stars NHL.com beat writer Mike Heika reports that the team would love to give Mats Zuccarello a new contract, but they must have the numbers work. Signing an extension with the Norwegian winger may be complex.

Analysis: Head coach Jim Montgomery has already lobbied with general manager Jim Nill to have Zuccarello back. Many of his new Dallas teammates said that “he fits like a glove” on the team. The 31-year-old was key in the Stars playoff run after coming from the New York Rangers at the trade deadline.

He was very helpful in adding secondary scoring for Dallas and they’ll likely find a way to get him back.

Rumour: Pierre LeBrun of The Athletic reports that Jason Spezza will likely not be back with the Stars. He’s an unrestricted free agent on July 1. The 35-year-old also said that he would be open to a return to the Ottawa Senators.

Jason Spezza has made one key decision. “I definitely want to keep playing,'' Spezza said. It won't be in Dallas as the veteran forward is headed to the UFA market for the first time in his career. I asked Spezza if a return to Ottawa would interest him:https://t.co/YndOlSETgP

Analysis: The veteran forward sank down in the lineup in his season with the Stars. He only scored eight goals and had 11 assists for 19 points in 76 games. Spezza did score three goals in the post-season, but the writing seems to be on the wall.

Rumour: TVA Sports speculated that the Habs could be in the market for some lefthanded defencemen. (Article is in French.) Some of the names include Jake Gardiner, Alec Martinez, Shayne Gostisbehere and Alexander Edler. Gardiner and Edler are free agents while Martinez and Gostisbehere would need to be acquired via trade.

Analysis: Montreal’s defence was a weak spot and adding one of these names would help. Finding a lefthanded shot would allow Victor Mete to develop on the second pair. The new acquisition would likely be on the top pairing with Shea Weber.

Rumour: Ted Kulfan of the Detroit News thinks the Red Wings could trade wingers Anthony Mantha or Andreas Athanasiou for a defenceman. New general manager Steve Yzerman has a deep talent pool of young forward prospects and he could get an NHL-ready defender to help speed up a rebuild.

Analysis: Mantha has five goals in four games at the IIHF World Championships. Yzerman could trade while the value is still high and get a key piece. The former Tampa Bay Lightning general manager built one of the better defences in the league with players like Victor Hedman and Ryan McDonagh.

Defence was a weak point for Detroit with aging veterans like Mike Green and Trevor Daley and inexperienced players like Filip Hronek and Dennis Cholowski. Mantha or Athanasiou would fetch a nice return and allow prospects Filip Zadina and Michael Rasmussen more ice time. 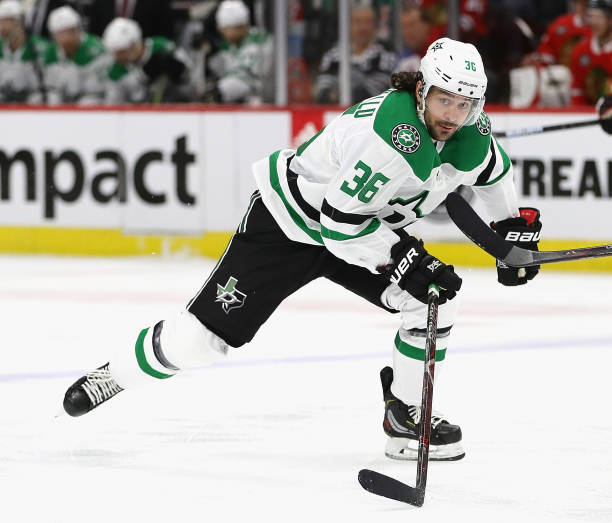 CHICAGO, ILLINOIS – FEBRUARY 24: Mats Zuccarello #36 of the Dallas Stars skates up the ice against the Chicago Blackhawks
at the United Center on February 24, 2019 in Chicago, Illinois. (Photo by Jonathan Daniel/Getty Images)