Game 7 of the Western Conference semifinals proved to be a cruel ending for Ben Bishop and the Dallas Stars. Dallas fell 2-1 in double overtime to the rival St. Louis Blues. Bishop made 52 saves, but the Stars couldn’t stop Pat Maroon and the Blues.

Despite not making the Western Final, the Denver native put together a career-season for Dallas. Bishop did everything he could to keep his team in the series.

The 32-year-old has been nominated for the Vezina Trophy twice before. He finished in the top three both times with him being runner-up in 2015-16.

Bishop’s goals against average has hovered around the 2.50 mark the last few seasons with the Tampa Bay Lightning, Los Angeles Kings and the Stars. However, this season he put his game together by posting a career-bests in goals-against average (1.98), save percentage (.934) and shutouts (seven).

He seemed to thrive under new coach Jim Montgomery and a much-improved defence. The Stars core four ofJohn Klingberg, Esa Lindell, and Miro Heiskanen gave Bishop plenty of help in front of the net. He was able to see pucks better and make key saves. Former coach Ken Hitchcock preached defence, but Montgomery’s new and more open style allowed the Stars to thrive.

His numbers may have bumped up to a 2.22 GAA and .933 save percentage, but he was more important than the statistics. Bishop almost got the Stars into the Western Conference final with his great Game 7 performance. The American netminder using all of that 6-foot-7-inch frame to keep Dallas in the series.

Some think Bishop’s height is an asset and it can be, but he is to spend most of the game in the crouching position as part of the butterfly style most goalies have. Bending down takes a toll on the back and other parts.

The Other Vezina Contenders

Bishop is not alone in having a season worthy of the Vezina. Tampa Bay’s Andrei Vasilevskiy and the New York Islanders Robin Lehner stand in the way of the first Vezina of Bishop’s career. Vasilevskiy’s season may have ended with a thud, but he led the league in wins with 39 and Lehner had a bounce-back campaign by finishing top five in save percentage, goals against average and shutouts.

All three candidates are worthy of winning. Bishop and Lehner have been key to their team’s turnarounds. However, Bishop’s improved play was one of the sparks to the Stars’ rise up the standings.

One concern for Bishop case is that he missed some time due to injuries. Anton Khudobin did a great job deputizing when needed. Khudobin filled in with 16 wins, two shutouts and a .923 save percentage. There’s no doubt the Russian backup was valuable, but Bishop was the clear number one. Bishop is actually second in minutes and starts among the three nominees.

The Stars goalie may or may not walk away with the Vezina, but there’s no doubt he had a special season. He was instrumental in Dallas returning to the playoffs.

There were concerns about the Stars’ defence and whether they could stop pucks. However, Bishop and the team proved they could be among the best in the West. 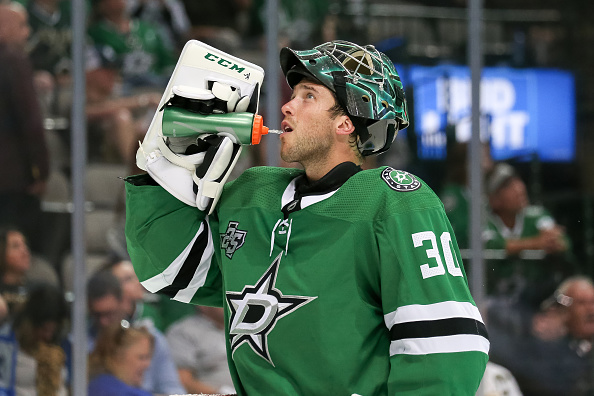