The Toronto Maple Leafs announced that forward John Tavares is sidelined indefinitely with an oblique injury. He will head back to Toronto for further evaluation.

Team Canada GM Jason Botterill tells TSN John Tavares suffered his oblique injury while training in Slovakia. Skated today, didn’t feel right, so decision was made with the Leafs to send him back to Canada.

Tavares was injured in Slovakia while practicing with Team Canada. He was getting ready for the upcoming IIHF World Championships set to start later this week. The 28-year-old tried skating but “didn’t feel right” according to Canadian general manager Jason Botterill. The team decided to shut him down and send him home.

Tavares had 47 goals and 41 assists for 88 points in all 82 games this season. He added 34 penalty minutes in the 2018-19 regular season. His possession numbers were 53.3 percent Corsi and a relative Corsi of 2.5. He added two goals and three assists in seven playoff games for Toronto.

The Mississauga, Ontario native has played for the New York Islanders and the Toronto Maple Leafs in his nine-year NHL career. He has 319 goals and 390 assists for 709 career points in 751 career games. New York originally drafted him as the first overall pick of the 2009 NHL Draft.

Detroit Red Wings forward Tyler Bertuzzi took Tavares’ spot in the lineup in practice. Sean Couturier and Sam Reinhart were on the top-line with Tavares before he left due to his injury.

Tavares will join teammates Auston Matthews and Zach Hyman as Leafs going through off-season medical issues. All three should be ready for the start of the 2019-20 season.

The Leafs will likely be cautious with one of their star players and he probably won’t be back for the rest of tournament. Tavares has represented Canada plenty of times and won gold twice at the World Juniors and the 2014 Winter Olympics. 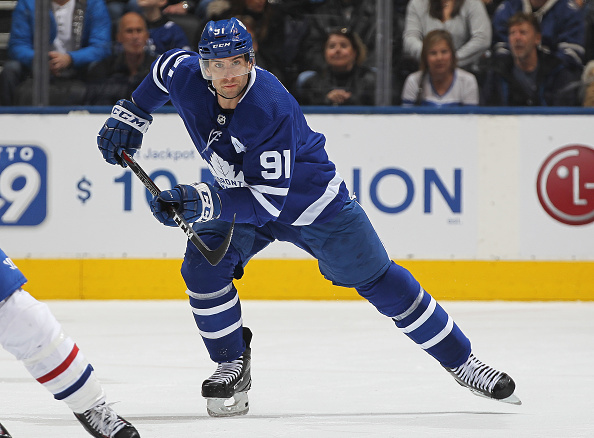 TORONTO, ON – FEBRUARY 23: John Tavares #91 of the Toronto Maple Leafs skates against the Montreal Canadiens during an NHL game at Scotiabank Arena on February 23, 2019 in Toronto, Ontario, Canada. (Photo by Claus Andersen/Getty Images)