The 2019 IIHF World Championships are coming soon and Team USA IIHF roster is one loaded with youth and potential. USA Hockey has taken the philosophy of inviting players that are young, hungry and want to be involved. Gone are the days where there were players from eliminated teams going to the event and treating it as an extended skate.

There’s loads of younger talent that possess speed and skill. Team USA head coach Jeff Blashill does have some veterans on the team like captain Patrick Kane, Chris Kreider and Alec Martinez. However, there are young players like Adam Fox, Christian Wolanin, Alex DeBrincat and both Jack Hughes and Quinn Hughes.

The Americans are in Group A along with Canada, Finland, Germany, Denmark, Great Britain, France and host Slovakia. Team USA is looking to improve on last year’s bronze medal finish. Also, keep in mind that the team can add players that get eliminated from the Stanley Cup playoffs.

Cory Schneider, Cayden Primeau and Thatcher Demko will represent the Stars and Stripes in between the pipes. This position does seem to be concerning as Schneider was injured and struggled most of the season.

Both Primeau and Demko are capable but inexperienced. Primeau played well at the recent World Junior Championships and earned a spot on the roster for the senior tournament. Demko has bounced between the Vancouver Cancuks and the AHL Utica Comets.

It would have been nice to have Jimmy Howard, Jonathan Quick or Connor Hellebuyck in net, but Team USA went with this trio. Schneider has a lot to prove and would love to use this event as a springboard to get to his old form.

There’s a lot of exciting speed and playmaking ability in the group. Fox and the elder Hughes are good puck-movers that have great vision.

Suter is the elder statesman of the group as he’s represented his country 11 times in his career. Martinez was a part of last year’s bronze medal winning team and will be counted on as well.

The defence is young, but fast and can make plays.

The forward group is arguably the strength of the Americans because of their speed and playmaking ability. Having any combination of Eichel, Gaudreau, Kane and Hughes together is making hockey fans salivate.

Blashill brings in a pair of his own players from the Detroit Red Wings in Larkin and Glendening. Larkin had a very good season with the Wings and is part of the team’s leadership group. Glendening will be a first-timer at the tournament.

Team USA is in its best medal-winning stretch at the event since the 1950s. The Americans have won bronze medals in 2013, 2015 and 2018. There’s no reason to think the United States can’t add another medal this year.

The Americans start the tournament against the host Slovakians Friday in Kosice. 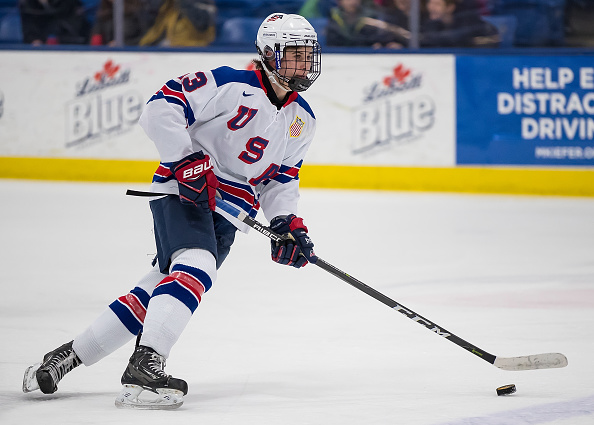 PLYMOUTH, MI – FEBRUARY 16: Jack Hughes #43 of the USA Nationals turns up ice with the puck against the Russian Nationals during the 2018 Under-18 Five Nations Tournament game at USA Hockey Arena on February 16, 2018 in Plymouth, Michigan. USA defeated Russia 5-4. (Photo by Dave Reginek/Getty Images)