The New York Rangers have signed college defenceman Adam Fox to an entry-level contract. Terms of the deal are yet to be disclosed. Fox will forego his senior season at Harvard to turn pro.

OFFICIAL: #NYR have agreed to terms with defenseman Adam Fox on an entry-level contract. pic.twitter.com/ez1Vo25xrY

Adam Fox Signs With the Rangers

The Rangers just acquired the negotiating rights to Fox from the Carolina Hurricanes on April 30. New York had to give up a second-round pick in this year’s draft a conditional second-rounder in 2020. Carolina will get that pick if Fox plays 30 games for the Rangers next season.

The Jericho, New York native score nine goals and 39 assists for 48 points in 33 games. Fox’s 95 assists and 116 points are both the second-most by a Harvard defenceman in school history. He was the first player in over the last 20 years to average 1.5 points a game.

The 21-year-old was one of the three finalists for the Hobey Baker Award for college hockey’s best player. Colorado Avalanche defenceman and University of Massachusetts player Cale Makar won that award.

Fox was selected 66th overall in the third round of the 2016 NHL Draft by the Calgary Flames. In 2018, the Flames traded the rights to Fox to the Hurricanes in a big deal involving Dougie Hamilton, Micheal Ferland and Noah Hanifin.

On the international stage, Fox won a gold medal with the U.S. World Junior Team in 2017, and earned bronze in 2018. He is currently competing with Team USA at the IIHF World Championships, held in Kosice & Bratislava, Slovakia, from May 10-26, 2019.

Adding Fox gives the Rangers a great puck-mover that generate offence from the blue line. The Rangers are starting to put together a young group of players that include Igor Shestyorkin, Lias Andersson, Vitali Kravtsov and others. New York still has a long way to go, but it got a highly-regarded player.

Harvard will miss fox, but still has a good group of players under former NHLer Ted Donato. 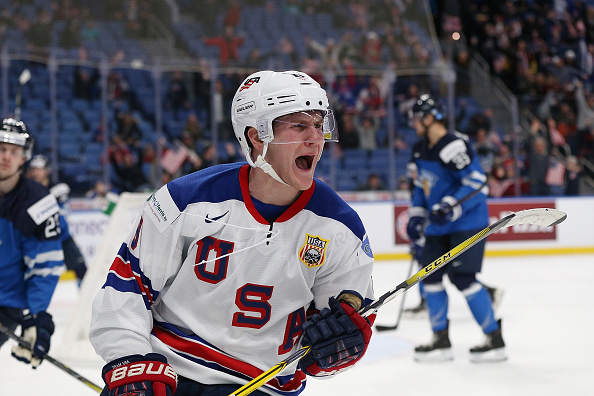 BUFFALO, NY – DECEMBER 31: Adam Fox #8 of United States celebrates after scoring the winning goal against Finland in the third period during the IIHF World Junior Championship at KeyBank Center on December 31, 2017 in Buffalo, New York. (Photo by Kevin Hoffman/Getty Images)