The Dallas Stars defence helped the club beat the Nashville Predators to advance to the second round of the playoffs for the first time since 2015-16. John Klingberg ended the overtime session with two minutes, 58 seconds left.

Dallas continued a trend of the wild cards beating a division winner. The Colorado Avalanche and Columbus Blue Jackets have already accomplished this feat. It may happen again Wednesday if the Carolina Hurricanes can win Game 7 against last year’s Cup winning Washington Capitals.

The Stars will now play the St. Louis Blues in the second round starting later this week. St. Louis eliminated Dallas the last time they met in the post-season in 2015-16.

The series boasted a battle of two of the best defensive groups in the league. Nashville already had a reputation for having a great defence. However, the Stars have built a great group of their own.

Klingberg got the series-winner for his first goal of the playoffs. The Swedish blueliner added five assists to anchor the Dallas “D.” Esa Lindell and Miro Heiskanen played key roles for the Stars as they stymied the Predators forwards.

The Stars will be tested by the Blues forwards like Ryan O’Reilly, Vladimir Tarasenko and others. However, Dallas may have taken the lead in having the best all-around defence in the league.

Nashville did get points from Roman Josi and P.K. Subban, but it couldn’t get the rest of their offence on track. The Predators have gone for broke at the deadline the last two seasons, but haven’t made it back to the Stanley Cup Final.

Both teams needed to get their bottom-six forwards going, but Alexander Radulov had quite the series against his former team. Radulov posted four goals and two assists to tie with Klingberg, Jamie Benn and Tyler Seguin for the Stars points lead.

Nashville’s top players never got on track as Rocco Grimaldi was the team’s leading goal-scorer. The Predators needed depth-scoring but also needed their big guns. They didn’t show up and that’s why Nashville is out early.

Not So Special Teams

The Predators’ power play has been anemic all season, but this post-season was bad. Dallas managed to not allow a single power-play goal in this series. Nashville didn’t get an extra-man goal in 15 opportunities.

Dallas was middle-of-the-pack with an 18.2-percent success rate on the power-play. However, they looked like world beaters compared to the Predators powerless power play.

Pekka Rinne put up some great performances in net, but he needed his team to cash in on some of their power-play chances. Not having Brian Boyle cause trouble in front of Ben Bishop‘s net for a couple of games did hurt. However, Nashville doesn’t look like the team with a great man-up unit like it did when Phil Housley was in charge of that unit.

Dallas’ young team gets to move on to face a good St. Louis team. Nashville has questions to answer about rejuvenating an offence that was a big problem. Predators general manager David Poile will try to get this team the Cup they’ve been seeking the last few seasons.

Many thought the series would go the distance, but the Stars showed that Jim Montgomery was able turn this club into a contender. Dallas could be ready to take the next step as a Stanley Cup threat. 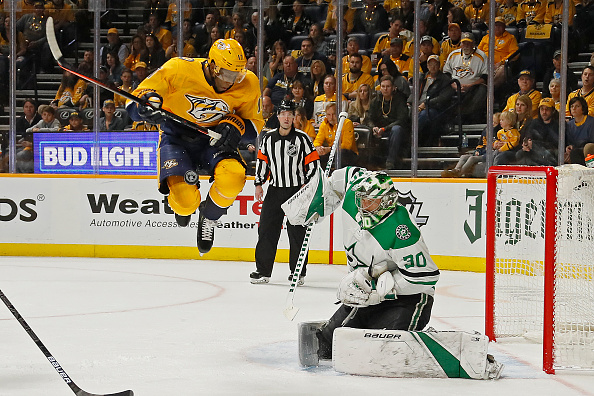 NASHVILLE, TENNESSEE – APRIL 13: Wayne Simmonds #17 of the Nashville Predators is hit by a puck while jumping in front of goalie Ben Bishop #30 of the Dallas Stars during the first period in Game Two of the Western Conference First Round during the 2019 NHL Stanley Cup Playoffs at Bridgestone Arena on April 13, 2019 in Nashville, Tennessee. (Photo by Frederick Breedon/Getty Images)