The NCAA Frozen Four is here and it’s now crunch time for the four teams looking to win college hockey’s national championship. Massachusetts and Minnesota-Duluth are the two number one seeds left standing. However, Denver and Providence are looking of upsets in the semifinal round.

How they got to the Frozen Four: Beat Harvard, 4-0, in round one; Beat Notre Dame, 4-0, in Northeast Regional Final.

Synopsis: It’s the first time UMass has been this far into the post-season. The Minutemen have made life easier for Fille Lindberg, who has only had to stop 30 shots between the two games. Colorado Avalanche prospect Cale Makar has been as good as advertised and has fans in Denver thinking of the future with him at the blueline. He is one of the three finalists for the Hobey Baker Award for best player in college hockey. Head coach Greg Carvel was named national coach of the year for his work in taking UMass to new heights.

How they got to the Frozen Four: Beat Ohio State, 3-0, in round one; Beat American International, 3-0, in West Regional Final.

Synopsis: The Pioneers are the other team that hasn’t given up a goal on the way to the national semifinals. Denver’s path was made considerably easier when American International shocked overall top-seed St. Cloud State in the opening round. Team captain Colin Staub has scored in both games for the Pios. Denver has the experience edge in these situations as it will be in its third Frozen Four in four seasons.

How they got to the Frozen Four: Beat Bowling Green, 2-1 (OT), in round one; Beat Quinnipiac, 3-1, in Midwest Regional Final

Synopsis: The defending champions fought hard to survive in round one against the Falcons. Mackay saved the day with the overtime winner and UMD had to rally. Tampa Bay Lightning prospect Cole Koepke set up both of Mackay’s goals in the opening round. Minnesota-Duluth was able to establish their game much better in the regional final. St. Louis Blues selection Scott Perunovich has had a bit of a sophomore jinx, but can turn it on any time.

How they got to the Frozen Four: Beat Minnesota St., 6-3, in first round; Beat Cornell, 4-0, in East Regional Final.

Synopsis: There’s some consternation that the Friars got two home games at Dunkin Donuts Center despite being the bottom seed in the regional. However, Providence has put up plenty of goals to get to this stage of the tournament. Tyce Thompson, brother of Buffalo Sabres forward Tage Thompson, has also been a big contributor for the Friars. Providence has a tournament-high nine draft picks on the team.

Both of these games are hard to gauge. The UMass-Denver game screams defensive-showdown. Makar gives the Minutemen a playmaker, but the Pioneers have made 12 consecutive tournaments. Denver should get to another final.

Minnesota-Duluth goalie Hunter Shepard has made a school-best 79 stars in a row and is 6-0 in tournament play. Providence can score goals if the pace is quick.

However, Minnesota-Duluth looks poised to become the first repeat champions since Denver did it in 2004 and 2005. 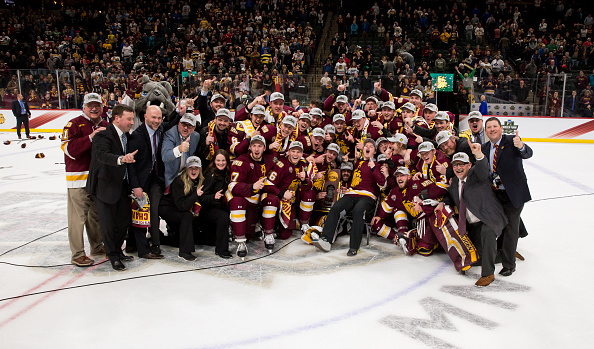