It’s time for the last regional preview of our look at the NCAA men’s hockey tournament. We give our NCAA West region preview that has top-overall seed St. Cloud State. NCHC rival Denver, Ohio State and American International also inhibit this bracket.

Synopsis: St. Cloud has been on a mission this season since being shocked by Air Force in the first round of last year’s tournament. The Huskies have scored the second-most goals in the country with 155 in 2018-19. The loss to Minnesota-Duluth was the first for the team since Jan. 26 at North Dakota. St. Cloud gets scoring from multiple sources as they have 10 players with at least 20-plus points.

Synopsis: New head coach David Carle has the program back in the tournament a year after Jim Montgomery left for the Dallas Stars. Denver challenged themselves out of conference with games versus Providence and at Wisconsin. The Pioneers have a pair of top-10 goalies in Devin Cooley and Detroit Red Wings hand Filip Larsson. Both are capable of stealing games for Denver.

Synopsis: The Buckeyes come into the tournament slumping with a 1-5-1 record in their last seven games. Players like Mason Jobst and Toronto Maple Leafs prospect Dakota Joshua will need to step up if they want to advance past a solid Denver squad. It’s the third straight NCAA appearance for Ohio State after not making the tournament since 2008-09.

Synopsis: The No. 16 overall team is usually reserved for the Atlantic Hockey champions. However, don’t sleep on the Yellow Jackets. The conference has pulled some big upsets like RIT did in 2010 and Air Force in 2018. St. Cloud was the victim of last year’s upset and it will be on its guard in round one. AIC is also making its inaugural tournament appearance.

The region lays out perfectly for St. Cloud State, but Denver and Ohio State are capable teams. However, St. Cloud State will exorcise some of its demons and get to the Frozen Four. 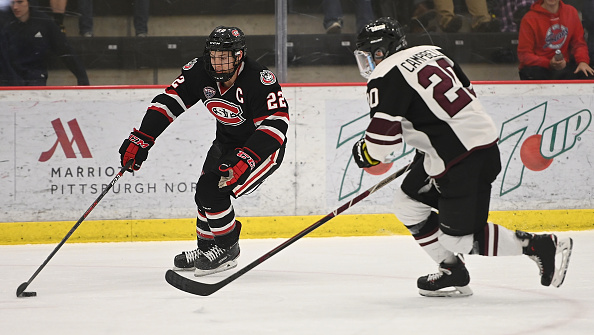 CRANBERRY TOWNSHIP, PA – JANUARY 04: Jimmy Schuldt #22 of the St. Cloud State Huskies controls the puck against Greg Campbell #20 of the Union Dutchmen in the third period during the game at UPMC Lemieux Sports Complex on January 4, 2019 in Cranberry Township, Pennsylvania. (Photo by Justin Berl/Getty Images)