It’s time for the NCAA Division I men’s hockey tournament where 16 colleges battle to be the national champion. Minnesota-Duluth is the defending national champion and will look to be the first repeat champion since Denver University in 2004 and 2005. We’ll look at all four regional brackets starting with our NCAA East region preview.

Where: Dunkin Donuts Center, Providence, R.I.
When: Saturday and Sunday

Synopsis: The Mavericks have won 14 of their last 15 games with their only loss being on Feb. 23 to Alaska. Minnesota State doesn’t have anyone drafted by an NHL team, but have plenty of talented players like Parker Tuomie, Charlie Gerard and goalie Dryden McKay. The Mavericks do face a challenging test battling fourth-seeded Providence on their own ice in round one.

Synopsis: The Huskies used to be the worst of the four Beanpot schools in Boston, but are now in their second straight tournament. Northeastern is seeking its first Frozen Four trip since 1982. The Huskies penalty kill is stingy as they have an 84.5-percent success rate. Defence will be on the menu in their first-round game at Cornell.

Synopsis: No matter the year, the defensively-sound Big Red make teams earn their chances. Undrafted Matthew Galajda is also one of the better goalies in the collegiate ranks. Cornell knows how to win tight games and can steal one with their good fundamentals.

Synopsis: The Friars have had some time off after being upset by Boston College in the conference quarterfinals. Providence has plenty of offensive firepower as it’s tied for 11th in most goals scored of any Division I school. Vegas Golden Knights prospect Jack Duggan and Pittsburgh Penguins pick Kasper Björkqvist help give the Friars offensive options.

This is one of the more difficult regions to gauge because Providence is playing a glorified home game. However, all four teams are talented. Minnesota State-Mankato has been on a roll as of late and is the favorite for a reason. 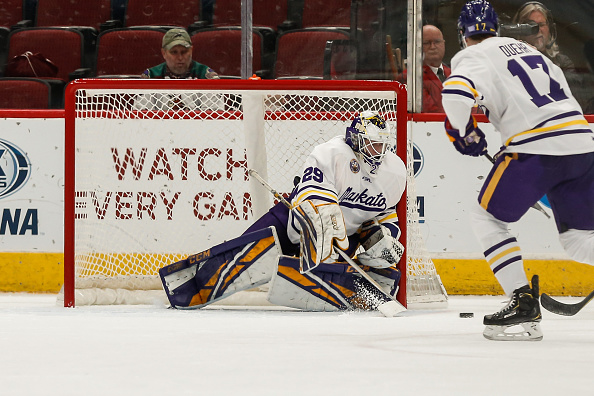