Many people think of Filip Forsberg, Ryan Johansen and Viktor Arvidsson when they think of Nashville Predators forwards. However, Colton Sissons is quietly heating up in Nashville’s quest for a second straight Central Division crown.

Colton Sissons has scored in the last two games after the formation of a new line with Craig Smith and Calle Jarnkrok. The North Vancouver, British Columbia native has already topped his career-high in goals with 13. However, the new partnership with Smith and Jarnkrok has given him his first points for the month.

The 25-year-old getting those two goals ended a nine-game pointless drought. Predators head coach Peter Laviolette put the three hard-working forwards together for the March 14 game against the Los Angeles Kings. Smith and Sissons provided goals to give Nashville a 3-1 win, which was the first regulation victory in three weeks.

Sissons had scored at least three goals in November, December and January before hitting a rough patch at the start of the New Year. His last goal before the Kings game was Feb. 25 against the Edmonton Oilers. His ice time was a season-low nine minutes, 23 seconds in a 3-2 loss at the Anaheim Ducks on March 12.

However, Smith, Sissons and Jarnkrok meshed well when they were put together. They accounted for the first goal in a big 4-2 victory over the San Jose Sharks on Saturday night. The line gave the Predators some energy to help them snag four of six points in California.

Sissons’ strong play is keeping veteran centre Kyle Turris out of the lineup. The former Ottawa Senator has struggled since his return to the lineup from a foot injury. Turris has only one goal and three assists in 16 games since his return. The $6 million forward has been a healthy scratch the last two games.

Some thought that Sissons would lose his spot in the lineup or have a night off to get his game right. However, he’s been doing the little things like killing penalties and forechecking. It looks the goals are finally coming back for Sissons.

Nashville’s “JoFA” line is prolific, but it would like some of its other forward groups to start adding goals. Sissons, Smith and Jarnkrok could be what the team needs as other squads will try to neutralize the top line. Depth carried Nashville to the Stanley Cup final in 2016-17 and Sissons played a big hand in that.

The Predators have work to do if they want to catch the Jets for first in the division. However, second and third-line forwards heating up before the end of the season will help out immensely. The Winnipeg Jets won the second round series thanks to their depth scoring. Nashville hopes to turn the tables if they meet for round two in this year’s post-season.

Colton Sissons and other forwards will need to be on their game if the Predators have any desire to making it back to the final. However, the last two games could lay that groundwork. 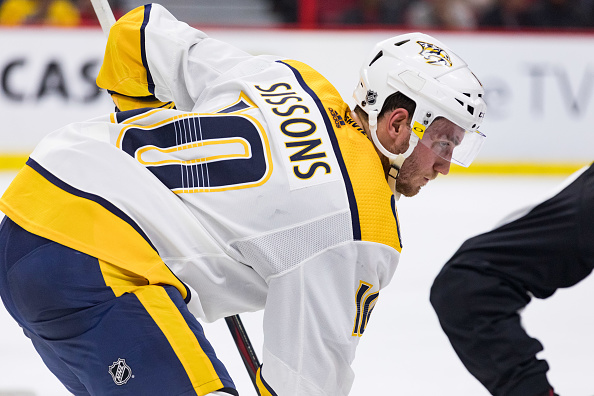 OTTAWA, ON – DECEMBER 17: Nashville Predators Winger Colton Sissons (10) prepares for a face-off during second period National Hockey League action between the Nashville Predators and Ottawa Senators on December 17, 2018, at Canadian Tire Centre in Ottawa, ON, Canada. (Photo by Richard A. Whittaker/Icon Sportswire via Getty Images)