The National Hockey League has announced that Nashville Predators forward Austin Watson has been reinstated and entered the follow-up care phase of the Substance Abuse and Behavioral Health Program.

Waston will continue to be monitored by the league’s program.

He has been out of the lineup since Jan. 29, when he was placed into stage two of the league’s substance abuse and behavioral health program. Watson was suspended for 27 games on Aug. 1 after a domestic assault charge. His sentence was later reduced to 11 in early October, ultimately serving a total of 18 games.

The second ban of the season stemmed from issues with alcohol and was suspended without pay during the duration. He opened up about his mental health issues at the time of his second suspension.

The Predators made a statement on Watson being placed into the next phase of treatment. They said that don’t wish to comment on the matter and to focus on the player and family’s well-being.

The Ann Arbor, Michigan native had seven goals and six assists for 13 points in 34 games this season. He also added 39 penalty minutes. His possession numbers are 45.3 Corsi and -10.4 relative Corsi.

Watson has only played for the Predators in his five-year NHL career. He has 30 goals and 30 assists in 250 career games. Nashville originally drafted him in the first round, 18th overall of the 2010 NHL Draft.

Nashville is going to play it safe with Watson’s welfare for now. The team is in the middle of a race for the Central Division title with the Winnipeg Jets and his physical style of play would be welcome. However, his health is the most important thing. He’ll likely be eased back into the lineup if and when he does return to the team. 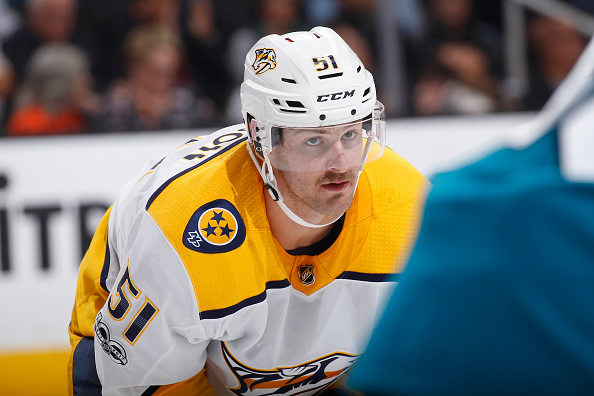 SAN JOSE, CA – NOVEMBER 01: Austin Watson #51 of the Nashville Predators looks on during the game against the San Jose Sharks at SAP Center on November 1, 2017 in San Jose, California. (Photo by Rocky W. Widner/NHL/Getty Images)