The National Hockey League lost one of the legends of the game as Detroit Red Wings great Ted Lindsay passed away at age 93. The Detroit Free Press announced the news early Monday morning.

A gentleman, a multiple Stanley Cup winner, an honoured member of the HHOF, a fan of the game, and a dedicated member of the #NHLAlumni– Ted Lindsay has passed away at the age of 93. A great loss for the entire hockey community. Our thoughts are with the Lindsay family. pic.twitter.com/WWDmZeDqR3

Lindsay was most known for his time on “The Production Line” with fellow Hall of Famers Gordie Howe and Sid Abel. He was an 11-time All-Star and won Stanley Cups in 1950, 1952, 1954 and 1955. Lindsay also won the Memorial Cup in 1944 with the Oshawa Generals of the OHL and the 1950 Art Ross Trophy for the league’s top scorer.

He had 379 goals and 472 assists for 851 points in 1,068 games played with the Detroit Red Wings and the Chicago Blackhawks. Lindsay also had a nasty streak thanks to his 1,808 penalty minutes. That aggressive edge earned him the nickname “Terrible Ted.” His rough play forced the league to create elbowing and kneeing penalties.

The Renfrew, Ontario native made the Wings at the age of 19 after trying out for them in 1944-45. He only played one game in the AHL for his entire career. His 5-foot-8-inch frame did not prevent him from being one of the best and toughest players in the league. He was elected to the Hall of Fame in 1966.

More than a Player

Lindsay helped organize the first NHL Players Association along with legendary Montreal Canadiens defenceman Doug Harvey. Their efforts were eventually thwarted, but a union finally happened years later. The NHLPA’s most valuable player award was renamed after Lindsay. The CBC movie “Net Worth” was based on his efforts to create the players union.

He also spent time as a play-by-play announcer in New York, a colour analyst with NBC, executive and coach. There’s also the Ted Lindsay Foundation that was founded in 2001 to help fund research for a cure for autism.

Lindsay’s mark on the game will last forever. 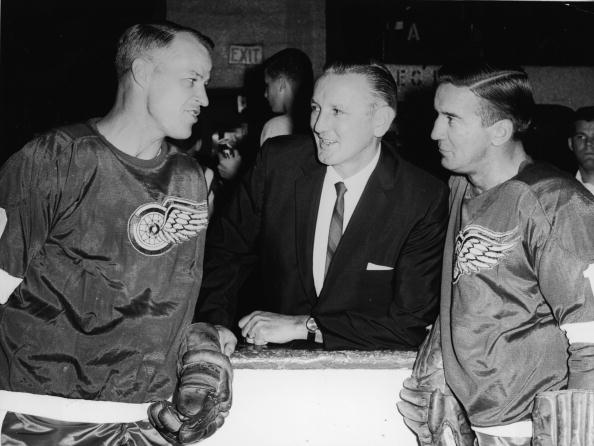 DETROIT, MI – OCTOBER 15: Ted Lindsay #7, Sid Abel (center), and Gordie Howie #9 of the Detroit Red Wings, pose together before a game on October 15, 1964 at the Detroit Olympia in Detroit, Michigan. The trio were known as the ‘Production Line.’  (Photo by Bruce Bennett Studios/Getty Images)

Last Word on Habs Pod: Montreal Canadiens Need to Best the West
Why NHL Shootouts Should Be Eliminated