It’s Monday and it’s another edition of our NHL trade rumours. We’re one week away from the NHL trade deadline and we’re breaking down all the action as we race towards next Monday. Today we look at possible rumours surrounding the Ottawa Senators, Montreal Canadiens and Vegas Golden Knights.

All NHL trade rumours are taken from the original source and are subject to change.

Rumour: TSN’s Darren Dreger reports that the Senators are likely to move Matt Duchene at the trade dealine. Pierre LeBrun confirms that several teams like the Columbus Blue Jackets, Winnipeg Jets and Nashville Predators are in the mix.

Not surpringsly, word is that several teams from both conferences have shown interest with Ottawa on Duchene. Believe that Columbus and Nashville are among the many teams which have checked in with the Senators on him https://t.co/xxQWuNLvQT

Dreger also reports that a decision about Mark Stone will be made early this week. Ottawa is hoping to keep Stone, so they have some kind of star power.

Analysis: The trade for Duchene and the price the Senators paid to Colorado Avalanche seems higher and higher. General manager Pierre Dorion may have handed the Avalanche a ticket to draft Jack Hughes. However, Ottawa will look to get something back to save face on the deal.

Stone and Ryan Dzingel are the two bright spots for the Senators and the team needs to keep some of its better players. But, it will remain to be seen if the team can strike a deal with these two players. Because, if not, they may also be on the way out.

Rumour: Eric Engels of Sportsnet reports that the Habs may be looking for defensive help at the deadline. Mike Reilly’s position with the team is shaky at best. Montreal general manager Marc Bergevin may be shopping for a second-pair defender.

Analysis: A left-shooting defenceman is on the wish list for Canadiens’ fans.  Los Angeles Kings blueliner Alec Martinez has been thought of, but his recent injury may put the brakes on that move. As well, Cam Fowler of the Anaheim Ducks is someone could be moving north of the border. There are lots of os potential targets out there, however, will Montreal be willing to pay?

Rumour: During the Headlines segment of Hockey Night in Canada, Sportsnet’s Chris Johnston said Vegas isn’t in the market for a rental forward.  General manager George McPhee would love a long-term solution if he does make a deal.

Analysis: The Knights do have over $3.5 million left in salary cap space. The Golden Knights are happy with their forward group and may stay quiet at the deadline. This may disappoint some fans, but, may ultimately be the best thing for the future. 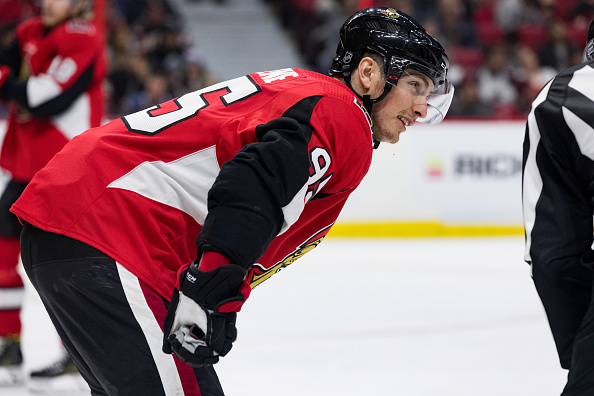 OTTAWA, ON – JANUARY 16: Ottawa Senators Center Matt Duchene (95) prepares for a face-off during third period National Hockey League action between the Colorado Avalanche and Ottawa Senators on January 16, 2019, at Canadian Tire Centre in Ottawa, ON, Canada. (Photo by Richard A. Whittaker/Icon Sportswire via Getty Images)