It’s Sunday and it’s time for another bath of fresh NHL trade rumours. We break down potential deals heading up to the Feb. 25 trade deadline. Today we talk about deals surrounding the Ottawa Senators, Toronto Maple Leafs and Winnipeg Jets.

All of our NHL trade rumours are taken from the original source and are subject to change.

Rumour: During the Hockey Night in Canada Headlines segment, Sportsnet’s Ellotte Friedman said decision day is coming soon for its trio of Matt Duchene, Mark Stone and Ryan Dzingel. He said teams usually let other clubs know 10 days before the trade deadline if a player is going to be available. That would mean sometime in the middle of the week before general manager Pierre Dorion will know the fate of the trio.

The Senators expect to make a decision next week on the future of their pending UFAs. https://t.co/6DP9tiWABn

Analysis: All three players will become unrestricted free agents at the end of the season. Duchene is at an affordable $6 million cap-hit and would be a good rental for a contender. Stone and the Senators signed a one-year “prove it” deal at over $7 million. Dzingel may not get as big of a return, but he’s been a surprise for Ottawa.

Duchene seems to be the one holding all the keys according to Sportsnet’s Chris Johnston. The Senators have been in extensive negotiations with their star forward. The sides are expected to talk again soon and Duchene said he loves it in the Canadian capital.

Rumour: Pierre LeBrun of The Athletic said that Toronto and the Carolina Hurricanes are scouting each other. The Leafs would love to add some more depth on defence or get Micheal Ferland. Carolina may also be looking into Jake Gardiner and ask about the blueliner.

Analysis: Toronto needs to find a way to make the numbers work with Mitch Marner becoming a restricted free agent. Ferland would add depth, but moving Gardiner off the books would be huge for Kyle Dubas in securing the money need.

However, Hockey Night in Canada’s Headlines segment said that Dubs is not willing to part with prospects Rasmus Sandin or Timothy Liljegren for a rental.

Rumour: The Winnipeg Jets are willing to part with prospect Sami Niku to make their playoff push. He’s the reigning AHL defenceman of the year.

Analysis: The Jets and the Nashville Predators are in arms race in pursuit of the Stanley Cup. Untouchable names like Eeli Tolvanen are now being tossed about in potential blockbuster trades.

Niku does have a dozen games of NHL experience, including 11 this season. He’s lauded as a puck-mover with strong vision and any team would do well to get a potential cornerstone defenceman like him. 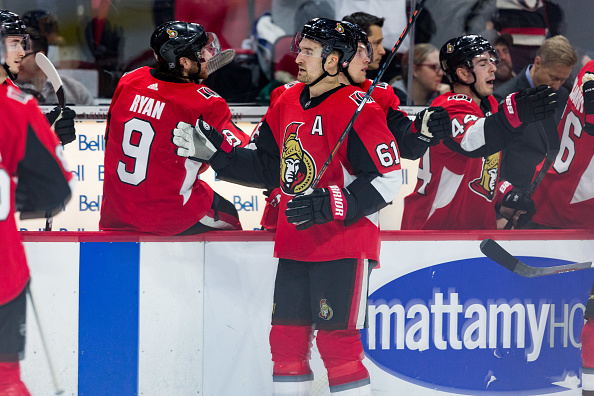 OTTAWA, ON – JANUARY 16: Ottawa Senators Right Wing Mark Stone (61) skates by the bench to celebrate a goal during third period National Hockey League action between the Colorado Avalanche and Ottawa Senators on January 16, 2019, at Canadian Tire Centre in Ottawa, ON, Canada. (Photo by Richard A. Whittaker/Icon Sportswire via Getty Images)