The Vancouver Canucks have announced that they have placed goaltender Thatcher Demko on injured reserve. Demko is expected to be out approximately 10 days with what coach Travis Green is calling a “slight sprain”.

Demko has a “slight sprain” and is out approximately 10 days, said Coach Green.

No update on Baertschi.

Demko suffered the injury in warm-ups before the Canucks 2-1 loss at the hands on the Philadelphia Flyers on Monday night.

Demko has appeared in one game for the Canucks this season. He made 36 saves in the contest as the Canucks went on to beat the Buffalo Sabres by a score of 4-3. The win was the second of Demko’s NHL career.

Demko spent most of the year with the Canucks AHL affiliate, the Utica Comets, where he posted a record of 8-5. He has a goals against average of 2.58 and a save percentage of .911 over that span.

The Canucks originally drafted Demko in the second round, 36th overall in the 2014 NHL Entry Draft.

Demko’s injury puts the Canucks in the tough position. Both goalies in the AHL are not signed to NHL contracts, so that means prospect Michael DiPietro will remain with the club on an emergency basis. It’s highly unlikely the Canucks will give DiPietro a start. So unless the club makes another move they will lean heavily on starter Jacob Markstrom to hold down the fort.

Markstrom has been a workhorse for the Canucks this season, appearing in 41 games and posting a record of 20-15-6 over that span. He has a goals against average of 2.81 and a save percentage of .909.

The Canucks currently are tied for the final wild-card position in the west. However, they have played three more games than the St. Louis Blues, who currently hold that position.

The Canucks next game will come at home against the Pacific-leading Calgary Flames on Saturday night. 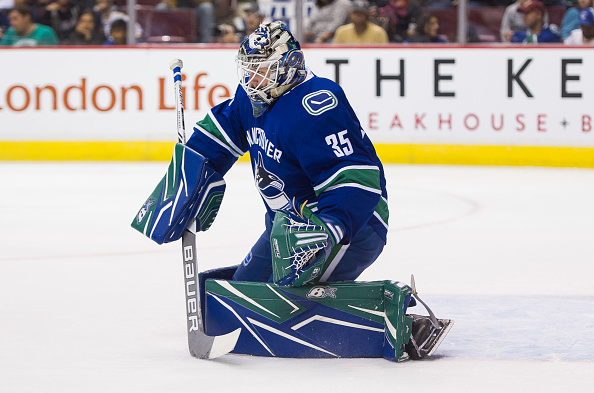 VANCOUVER, BC – SEPTEMBER 17: Goalie Thatcher Demko #35 of the Vancouver Canucks make a save against the Vegas Golden Knights in NHL pre-season action on September 17, 2017 at Rogers Arena in Vancouver, British Columbia, Canada. (Photo by Rich Lam/Getty Images)