The Ottawa Senators found themselves losing a 5-4 game Wednesday night. The game was against their rivals, the Toronto Maple Leafs. The Leafs struck early and were up lots throughout. However, Ottawa never shied away, they kept coming back. Saying that, the downfall of Ottawa was their downfall all season. The Ottawa Senators defence just was not good enough.

So, just how bad was the Ottawa Senators defence? Well, let’s take a look. On the first goal, Craig Anderson bailed both Ben Harpur and Mark Borowiecki out big time. Harpur completely lost his man out front of the net.

However, the puck goes down the ice and on comes the top pair. Thomas Chabot and Dylan DeMelo. The puck gets turned back the other way on an odd-man rush and the pair find themselves completely lost.

Andy with a HUGE save… Then #LeafsForever comes down and score 15 seconds later. Horrible coverage this game. #Sens trail 1-0. pic.twitter.com/ujO97blJQp

There’s a lot to dissect here. Firstly, losing someone in front of the net is a very common theme for the Ottawa Senators defence. It happens many times a game and always leaves the goalies out hanging. Next, Ottawa gives up a ton of odd-man rushes. It is part of their style, as they often have a 3 on 2 one way and it turns around. However, it puts the defence in a bad spot. Lastly, the Ottawa Senators defence seem to get caught puck watching a ton. Defensive awareness is a much-needed attribute for this team.

The second goal is a case of Ottawa failing to clear the puck. I try not to rag on Cody Ceci as much these days, because there really is no point. Night in and night out it seems obvious enough that he is lost out there. If someone doesn’t see that by now, they may never see it.

Cody Ceci is a bad, bad hockey player. Andy also probably should have had a piece of this but didn’t look like he was ready for it. Either way, Leafs tie it 2-2. pic.twitter.com/GX28gqmyNP

Case in point with the second goal of the night. The puck bounces off the glass and Ceci makes a poor attempt to knock the puck away. While he obviously didn’t have tons of time, simply taking a smaller touch on that puck and then shooting it would have been a much better move.

It’s easy to say this as someone rewatching footage and typing it. However, if you’re paid 4.3 million dollars you better be good at your job. Too many times in the game Ceci or another Sens player gets caught aimlessly swatting at the puck.

The third goal, where to even begin? Should we mention that Harpur should absolutely not be defending one of the best players in the league? Harpur has found a way to use his size more effectively in his own end, however, his lack of foot speed shown here is very concerning if the Sens want to keep using him against tough competition.

I… I have no words. Matthews makes it 3-2. #Leafs #Sens pic.twitter.com/fqnaWIIiGS

Next, we have Borowiecki sliding across the ice. To be honest, in theory, I don’t think that was the worst idea. However, the execution of it was just horrible. Boro slides across the ice almost completely missing Auston Matthews who drags the puck around him. Lastly, there is Jean-Gabriel Pageau who does get a stick lift but completely loses the puck and Matthews, leading to a Matthews goal.

While a play this disastrous doesn’t always happen, it is common to watch an Ottawa team scramble around on the ice a lot. It seems like as soon as they lose some structure they are jumping and diving all over the place. Leading to open men and blown coverage.

As mentioned earlier, the Sens style of aggressive play makes for lots of odd-man rushes back the other way. This can make it very hard on the Ottawa Senators defence. On the fourth goal, Harpur is left to defend a 3 on 1. Obviously, this can not be all his fault. But, the way he played it makes you question what the team is teaching here.

This was the third or fourth time this game that a Sens defenceman decided to play a 2 on 1 by completely overshooting a slide play. Give Mitch Marner some credit for a mean toe-drag there. However, that’s the best we could do? Harpur goes down on one knee which isn’t even blocking a ton of the passing lanes off. Even laying across would have been more effective because at least Marner would have had to make a saucer pass.

On the fifth goal, Chabot and DeMelo once again finding themselves struggling to defend a transition play. Once again, how many times has this happened this year? It feels like no matter who is on the Ottawa Senators defence gets overwhelmed on the rush.

It is a pretty nice play by the Leafs, as a few of the goals were. But, going forward you would like to see Chabot possibly turn a bit earlier there so he can keep a step up with Morgan Rielly.

Why This Needs Focus

To some, this article may come off as someone sitting at home and “easily” dissecting a game. I get that hockey is a very fast sport and so hard to play. Mistakes will happen. However, the problem is that these mistakes happened more than once in this game. Five or more times, actually.

They also have happened all throughout the year. From every single player. We are more forgiving of younger guys like Chabot who are learning as well as making things happen offensively. But there are also guys like Ceci and Harpur who don’t seem to move the needle either way. This is a very common issue that needs to be looked at and it was put on full display against the Leafs.

Who Is To Blame?

This is a tough one with no real answer. Who is actually to blame for the Ottawa Senators defence struggles? Well, for starters, it is the players. This team is not the best in the NHL at all. However, the absolute blown coverage some nights is horrendous. They look like they don’t belong in the NHL at times. The mental awareness just doesn’t seem to be there for some of the players. The team is so focused on watching the puck that so often a player will be wide open behind 3 Senators.

Next, there is also the coaching. Once again, this isn’t a very talented group. However, you’re also choosing to player Harpur over a guy like Christian Wolanin, who has legitimately been good when given a chance. Boucher needs to find a system that doesn’t bleed shots like this one. Talent evaluation is a big part of that. The visual below from Hockey Viz shows just how much Ottawa lets up. That massive red pool in front of the net is just unacceptable. 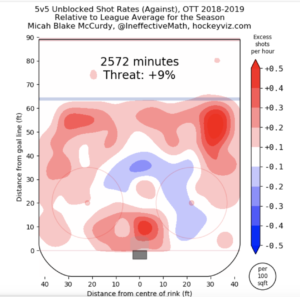 Lastly, it needs to fall on the General Manager and/or Owner. I mentioned it isn’t the greatest picking of players. That is on the GM. He needs to go out and find better guys to fill the team with. Ottawa is caught way behind other teams in their mentality. They are still carrying more than one guy on this team because they are either big or just “play lots of minutes” It is time for Dorion to stop ignoring the results and address the Ottawa Senators defence.