The Detroit Red Wings have announced that forward Dylan Larkin is sidelined for one to two weeks with a strained oblique. General manager Ken Holland and head coach Jeff Blashill each made an announcement on Saturday.

Larkin left in of Friday’s 3-2 overtime victory against the Toronto Maple Leafs. He skated off the ice in obvious discomfort and was not available for Saturday’s 2-0 victory over the Ottawa Senators.

The Waterford, Michigan native has scored 22 goals and 27 assists for 49 points to go along with 43 penalty minutes in 52 games. His possession numbers were 54.2 percent Corsi and a relative Corsi of 9.1.

The 22-year-old has only played for Detroit in his four-year NHL career. He has 78 goals and 111 assists for 189 career points in 294 career games. Detroit originally drafted him in the first round, 15th overall of the 2014 NHL draft.

The Red Wings were already shorthanded as Tyler Bertuzzi missed the weekend’s games and Michael Rasmussen is on a three-game conditioning stint with Grand Rapids of the AHL. Only Luke Witkowski was available as a reserve for Saturday’s game.

Detroit is hoping Larkin is out closer to one week than two. The team will reevaluated Larkin later in the week.

Losing Larkin is a huge blow as he’s the team’s leading goal-scorer with 22 and leading point man with 49. He has stepped up as a leader since Henrik Zetterberg had to step away from the game because of back injury. Many think Larkin will be the next Red Wings captain.

Larkin averages nearly a point a game and is rounding into a more complete offensive player. He’ is improving at the faceoff dot with a career-best 54.4 percent success rate.

A loaded Atlantic Division squad kept the former University of Michigan product from being an All-Star. 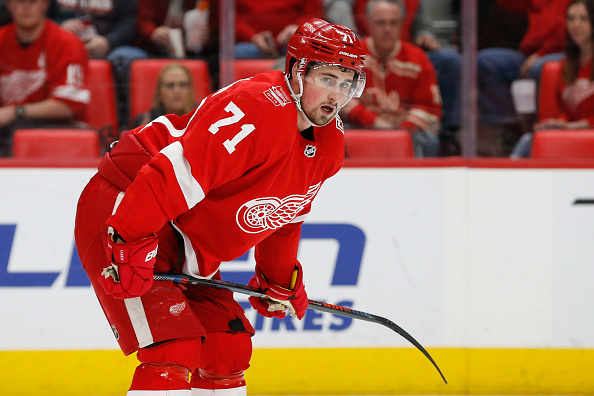