If you believe the rumours of the Toronto Maple Leafs shopping for a right-handed defenceman, be careful not to expect too much. It’s not that Kyle Dubas wouldn’t love to acquire a top pairing defenceman to play with Morgan Rielly. It’s the cost that will hold him back.

“Certainly the Leafs are looking for one. In terms of what they’re looking for, the problem is if you’re going to go after a top four — and we mentioned Pietrangelo months ago, and it’s debatable whether he’s still available but they are perhaps, the St. Louis Blues, two or three or four-game losing streaks away from making him available — they’re expensive. Extremely expensive.” Nick Kypreos of Sportsnet said.

Defencemen have always been expensive. The position is difficult to play so there are fewer players perceived as excellent players. There are many that are perceived as lacking, usually on the defensive side of the position. Just look at Jake Gardiner and the recent booing.

Is Pietrangelo worth a player like Kasperi Kapanen and a draft pick in the long run, which may not even be enough. It’s not just a question of trade value. Is it worth trading Kapanen to upgrade the team’s current defence to include Pietrangelo? Perhaps there’s another way to upgrade the team that doesn’t cost quite so much.

“They don’t want to part with their [2018] first-rounder in Rasmus Sandin or Kasperi Kapanen,” Nick Kypreos Sportsnet.

“I think as a matter of fact, there were a couple of teams that said that they did ask about Kapanen and they were told ‘no sale,’” Elliotte Friedman Sportsnet.

Dubas already said he’s not trading William Nylander. If they’re not trading Kapanen either, then they really don’t have a lot of big chips to play with. Could they trade a pile of prospects and picks for a player like Pietrangelo? Something like Jeremy Bracco, a first round pick, and the recently signed Trevor Moore? Maybe, but it’s more likely there’s someone else out there offering something better.

There’s an addition by subtraction factor in adding a defenceman as well. If the Maple Leafs add a right hadned defenceman, Ron Hainsey would probably see much less ice time. That’s a good thing, but it happens no matter what, assuming the playing coming in is better than Hainsey. The new player doesn’t have to be miles ahead of Hainsey to take significant ice time away from him. It doesn’t matter who the Maple Leafs add to the roster, the value of playing Hainsey less is the same.

The Maple Leafs are not likely to make a blockbuster trade for a top pairing defenceman. Not without giving up serious assets, which they appear to not be willing to do.

Sandin may have passed Liljegren on the depth chart as far as prospects go. Craig Button certainly thinks so. That doesn’t mean Liljegren is suddenly an asset the Maple Leafs are looking to move. For one, he’s a right-handed shot, which is exactly what the Maple Leafs are looking for. Sandin is a lefty. Liljegren isn’t going to help much this season, but he’s still a player could find himself as a top-four defenceman in the coming years.

The Maple Leafs aren’t just thinking short-term. They want to compete for years. Trading Liljegren before anyone really knows how good he can be probably isn’t wise. Not unless Dubas sees something no one else does and is looking to trade Liljegren while his value is at its peak. It’s more likely Kypreos was just speculating on Liljegren.

There’s no doubt the Maple Leafs want to improve their defence. There are other ways to do that than trading young, valuable assets. Kypreos also mentioned the Philadelphia Flyers could be looking to move Radko Gudas. This is the sort of move the Maple Leafs are more likely to make. He’s not a flashy player, but he’s the sort of player that can help the Maple Leafs in more ways than one. He has a Corsi For of 54.6 percent. He’s also a tough player to play against.

Put Gudas on the right side against the Boston Bruins in the first round of the playoffs last year and that series may have gone a different direction. One more favourable to the Maple Leafs. The Bruins exploited a weak right side of the Maple Leafs defence last year. Adding Pietrangelo will solve that, but so will adding Gudas, and Gudas will cost much less.

Gudas isn’t the only cost-effective player out there that will help. Toronto has plenty of flash and scoring ability. That’s usually what costs the most in terms of trade value and against the salary cap. What Toronto needs more of is toughness and defensive capability. There’s more of that in the league than high profile goal scores so they come cheaper, if you know where to look.

There is also the Salary Cap to consider. Pietrangelo comes with a cap hit of $6.5 million. Gudas has a cap hit of $3.35 million. The Maple Leafs are already likely to lose Gardiner to free agency this offseason as they try to sign Auston Matthews and Mitch Marner to what will be heavy cap hits. They can’t add a lot of salary without moving some contracts or risking losing more players that don’t want to lose.

One player that’s rumoured to be on the move is Nikita Zaitsev. He won’t return a significant player or draft pick, but getting his $4.5 million dollar contract off the books will open a lot of doors for Dubas.

You Get What You Pay For

Dubas isn’t willing to part with most, if not all, of his top assets. That doesn’t mean he can’t find a way to improve this team’s defence. Just like he spends the offseason looking for value players from overseas, see Igor Ozhiganov, and other team’s castoffs, see Tyler Ennis, Dubas is going to be looking for value at this year’s trade deadline.

He did sign John Tavares, which wasn’t exactly a value deal. That signing will turn out to be an anomaly in Dubas’ career. One key difference with the Tavares signing is that the Maple Leafs only had to spend money. In a cap world, that’s still a concern, but the real cost, to Dubas, is losing players.

“I don’t think we want to get into the business of not having excellent young players.” Dubas from earlier this season. 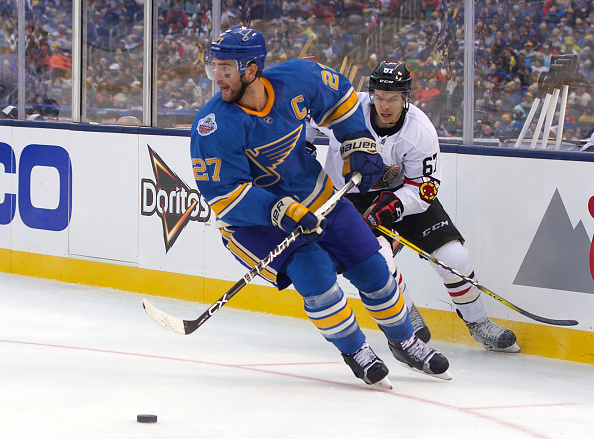 ST. LOUIS, MO – JANUARY 02: St. Louis Blues defenseman Alex Pietrangelo (27) skates with the puck during a NHL Winter Classic hockey game between the Blues and the Chicago Blackhawks on January 02, 2017 at the Busch Stadium in Saint Louis, MO. (Photo by Jimmy Simmons/Icon Sportwire)