The Detroit Red Wings have announced that forward Michael Rasmussen is sidelined has been placed on injured reserve due to a lower-body injury. Detroit also activated defenceman Danny DeKeyser from the IR.

Blashill says he anticipates Danny DeKeyser being in the lineup tonight against the Ducks.

There wasn’t a specific play where Rasmussen got injured, but he’s been out for over a week. The 19-year-old hurt his hamstring earlier in the month. He will miss his fifth game tonight against the struggling Anaheim Ducks.

The Surrey, British Columbia native has six goals and seven assists for 13 points in his rookie season. He also has 19 penalty minutes for Detroit. His possession numbers are 45.5 percent Corsi and a relative Corsi of -1.9. Rasmussen was drafted in the first round, ninth overall of the 2017 NHL draft.

Jacob De La Rose could return to the lineup after being out for unknown reasons. Red Wings head coach Jeff Blashill did not elaborate why the Swede has been out. He would be slotted onto the fourth line. He has three goals and four assists in 35 games this season.

DeKeyser has returned to the lineup after missing the last 19 games with a hand injury. He has one goal and six assists for seven points in 20 games. The Macomb Township, Mich. native also has 21 penalty minutes. His possession numbers are 47.6 percent Corsi and a relative Corsi of 1.3.

The 28-year-old has only played for the Red Wings in his seven-year NHL career. He has 25 goals and 81 assists for 106 points in 401 career games. He was signed as an undrafted free agent out of Western Michigan University.

Detroit hasn’t decided that who DeKeyser will replace, but Filip Hronek could be going down to AHL Grand Rapids.

The Red Wings are still without Trevor Daley, so DeKeyser is a welcome return. Mike Green recently returned for Detroit also.

Rasmussen has spent a lot of time on the power play due to his large frame. He’s still raw but will get plenty of time to prove himself as Detroit is pretty much out of contention. 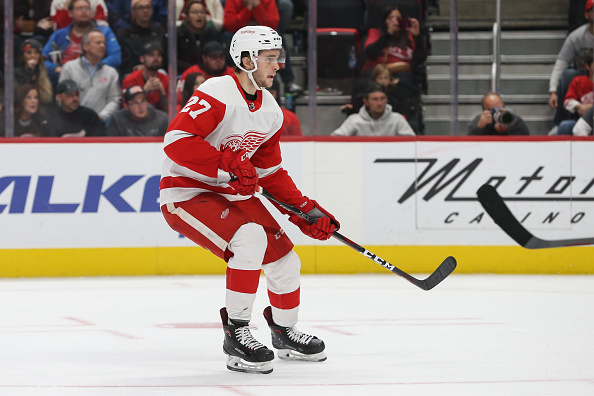