The Toronto Maple Leafs announced that goalie Frederik Andersen is on injured reserve with a groin injury. Backup goalie Garret Sparks is also in concussion protocol.

Frederik Andersen has been placed on the injured reserve list (retroactive to Dec. 23) while Garret Sparks is being withheld from competition for precautionary reasons on Thursday and is being evaluated under the concussion protocol following Wednesday’s practice. #LeafsForever

Andersen has been out of the lineup since Dec. 22 with a groin injury. The move is retroactive to Dec. 23.

The Herning, Denmark native is 20-9-1 in 30 games this season with a 2.50 goals-against average and .923 save percentage. His 20 wins rank second in the league. He also has one shutout this season.

Sparks is being held out of the lineup after taking a shot off his mask in Wednesday’s practice. He finished practice after being visibly shaken up. The news was first reported by Sportsnet’s Chris Johnston.

The 25-year-old has played only for the Toronto Maple Leafs in his two-year NHL career. He has a career record of 12-11-2 in 27 games. Sparks has a 3.01 GAA and a .897 save percentage. He also has two career shutouts. Toronto drafted Sparks in the seventh round, 190th overall of the 2011 NHL draft.

Toronto has called up recently acquired goalie Michael Hutchinson and Kasimir Kaskisuo from the Toronto Marlies of the AHL. Hutchinson is expected to start Thursday against the Minnesota Wild. Both are on the Leafs on an emergency basis.

These injuries will test the Leafs depth as they try to stay in the fight for the Atlantic Division. Toronto is 10 points behind the Tampa Bay Lightning for first place in the division. 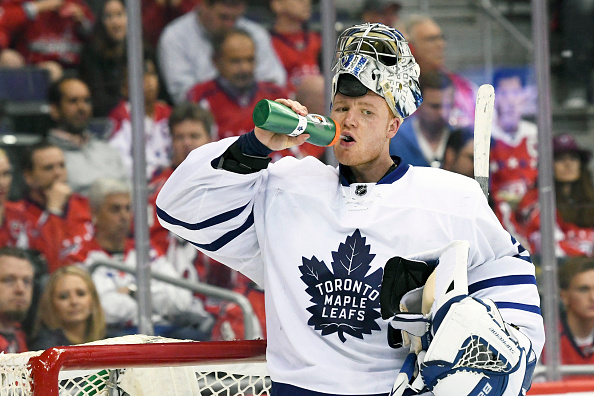 WASHINGTON, DC – April 15: Toronto Maple Leafs goalie Frederik Andersen (31) takes a drink during a break in the second overtime against the Washington Capitals on April 15, 2017, at the Verizon Center in Washington, D.C. in Round 1 of the NHL Playoffs. The Toronto Maple Leafs defeated the Washington Capitals, 4-3 in the second overtime. (Photo by Mark Goldman/Icon Sportswire via Getty Images)