The Detroit Red Wings have announced that defenceman Trevor Daley is sidelined for for three to five weeks with a broken foot. Detroit head coach Jeff Blashill made the announcement on after Monday’s loss to the Florida Panthers.

Blashill announces after game Trevor Daley has broken foot, and will miss 3-to-5 weeks….hits keep coming for #RedWings…says it happened in pre-game skate

Daley broke his foot during the morning skate before Monday’s game. His foot was hit by a shot during the practice. The 35-year-old was recently presented with a jet ski for playing in his 1,000th career game prior to the holiday break.

He has two goals and four assists for six points in 31 games this season. Daley has added 10 penalty minutes so far this season. His possession numbers are 41.6 percent Corsi and a relative Corsi of -7.7.

The Toronto native has played for the Dallas Stars, Pittsburgh Penguins, Chicago Blackhawks and Detroit Red Wings during his 15-year NHL career. He has 89 goals and 211 assists for 300 career points in 1,002 career games. Dallas originally drafted him in the second round, 43rd overall of the 2002 NHL draft.

This is another injury to an already depleted Red Wings’ defence. Mike Green and Danny DeKeyser are both out with various ailments. Detroit struggled at the start of the season due to defensive injuries.

The Red Wings did play well over the last couple of months when the veterans were in the lineup. However, these injuries have caused another slide for the club. The Wings are 13-8-2 with Green in the lineup, 2-11-5 without him.

Blashill hasn’t decided if he’ll bring up another defenceman from Grand Rapids of the AHL or if he’ll go with the six that played on Monday night. 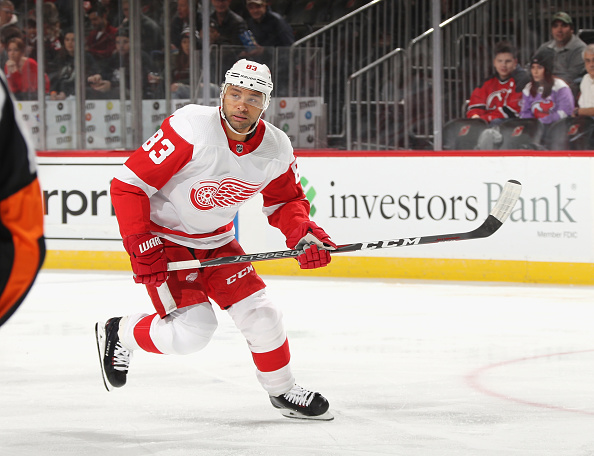