The Ottawa Senators have announced that defencemen Thomas Chabot and Christian Jaros are both sidelined for three weeks with their respective injuries. Chabot is out with an upper-body injury and Jaros is sidelined with a broken finger.

#Senators defencemen Thomas Chabot (upper-body) and Christian Jaros (finger) will be out three weeks and a month, respectively.

Chabot picked up his injury in the second period of Friday’s 6-3 loss to the New York Islanders. The 21-year-old took a hit from Matt Martin and did not return.

Chabot has scored 10 goals and 28 assists for 38 points in 38 games this season. He also registered 20 penalty minutes. His possession numbers are 47.1 percent Corsi and a relative Corsi of 6.9.

The Sainte-Marie, Quebec native has played only for the Ottawa Senators in three-year NHL career. He has 19 goals and 44 assists for 63 career points in 102 career games. Ottawa originally drafted Chabot in the first round, 18th overall of the 2015 NHL draft.

Jaros likely broke his finger in a fight with Ross Johnston on Friday night.

The Kosice, Slovakia native has a goal and four assists for five points in 28 games this season. He also has 11 penalty minutes. His possession numbers are 41.4 percent Corsi and a relative Corsi of -2.9.

Jaros has only played for the Senators in his two-year NHL career. All of his career points have come this season as he played just two games in 2017-18. The Senators originally drafted him in the fifth round, 139th overall of 2015 NHL draft.

Forward Magnus Pajaarvi is day-to-day with an upper-body injury to compound the Senators’ injury problems. The team will give Marcus Hogberg his first career NHL start against the Washington Capitals.

All of the blueline injuries will put a strain on a taxed defensive group. Chabot has really broken out this season with his offensive play.

The Capitals’ power play is one of the best in the league and not having both players will hurt the Senators. 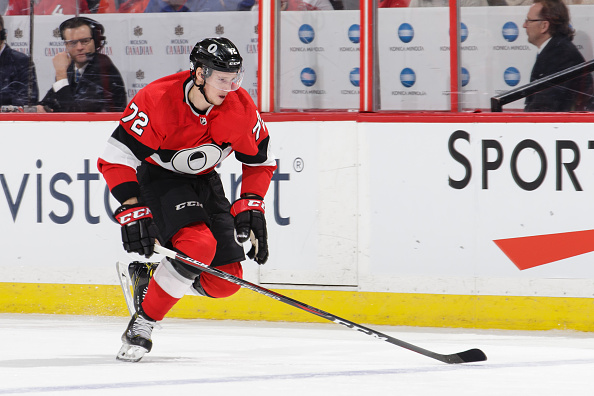