The Nashville Predators special teams may be the only thing holding back from a perfect start. Nashville does have the most points in the league with 27 going into Thursday’s games. However, there are cracks in the armour.

The Predators penalty kill sits at 22nd in the league with a 78 percent efficiency rating. However, Nashville’s power-play is struggling even more. The Predators are only working at an 11.6 percent success rate.

Nashville’s power play has been a glaring weakness this season. The cracks were showing as early as the first week of the campaign. The Predators came up empty in their recent California road trip. Nashville went 0-for-7 in Monday’s game at the Anaheim Ducks.

Head coach Peter Laviolette has tried everything to kickstart the extra-man unit. He mixed up the power-play unit against the Ducks. However, he changed everything back after the new lines came up empty.

“It’s really tough to do without practice time,” Laviolette said after the Anaheim game. “I thought we started to get some looks in the overtime. We could’ve won the game a bunch of times on the power play and it just didn’t go for us, so that’s where we’re at right now with it. It’s gotta be better.”

Penalty Kill Not Faring Much Better

The Predators penalty kill is struggling just like the power play. Nashville is in the bottom half of the league and that’s surprising considering who it has on defence.

The team’s defence is arguably one of the best in the league, but they man-down unit is still not faring well. San Jose was able to use its power play to take the Western Conference showdown on Tuesday.

Austin Watson came off suspension on Thursday and will help the penalty-killing unit. Watson was out for the first 18 games off the season after being arrested for domestic violence in June. He was originally suspended for the first 27 games before an independent arbitrator reduced the penalty by nine games.

Watson is a polarizing figure and a chunk of the Predators fanbase would like to see him gone. However, there’s no denying how useful he is on the kill. He played 170 minutes on the penalty kill last season and formed a great partnership with Colton Sissons.

The forward also was great on offence as he scored 14 goals, with four of them shorthanded tallies. He also led the club in hits and forwards with blocks. Watson is valuable love him or hate him.

His return comes at the right time as Viktor Arvidsson and Calle Jarnkrok are both out with injuries. Jarnkrok also took up minutes on the penalty kill.

Nashville is one of the best teams and the league and is a Stanley Cup favourite. However, saggy special teams may be the team’s downfall. Teams like the Winnipeg Jets have great power plays and will make the Predators pay if things aren’t fixed.

The good thing is that Watson is coming back and there’s still plenty of time left in the season. Arvidsson and Jarnkrok’s returns will also help the special team units out.  The Predators can become even more dangerous if they sort these problems out. 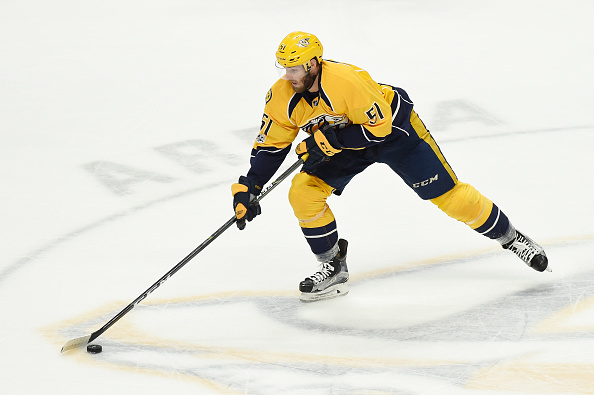 NASHVILLE, TN – MAY 22: Austin Watson #51 of the Nashville Predators controls the puck against the Anaheim Ducks during the first period in Game Six of the Western Conference Final during the 2017 Stanley Cup Playoffs at Bridgestone Arena on May 22, 2017 in Nashville, Tennessee. (Photo by Sanford Myers/Getty Images)