Boston Bruins defenceman Zdeno Chara left Wednesday night’s game against the Colorado Avalanche with a lower-body injury and did not return. According to the Boston Globe, a team spokesman said they would provide an update on Chara on Thursday if necessary.

Zdeno Chara will miss the remainder of tonight's game after this.https://t.co/7nqC6uDrqe

Chara left the game with what appeared to be a left knee injury. His knee bends awkwardly after he finished his check on Avalanche forward Carl Soderberg. Chara did skate off under his own power but did not return to the game. The injury occurred late in the first period.

Chara was seen leaving the Pepsi Centre with a slight limp. The team is unsure if Chara will continue the road trip to Dallas on Friday or get sent back to Boston for further evaluation.

The 41-year-old has scored three goals and added one assist in 17 games so far this season.

The Chara injury couldn’t come at a worse possible time for the Bruins. The Bruins are already without Charlie McAvoy (concussion), Kevan Miller (hand), Brandon Carlo (upper body) and Urho Vaakanainen (concussion). Of the four, Miller looks the closest to returning as he travelled with the team to Colorado.

At 41, the Bruins captain is still a very important part of the Bruins defence. He currently averages the second most ice time on the team at 21:30 minutes per game. Just four seconds less than defenceman Torey Krug.

If Chara and Miller are not ready to go for Friday night, youngster Jakub Zboril will draw into the depleted Bruins lineup.

The Bruins are heading into a back to back situation this weekend. The team will travel to Dallas on Friday night to play the Stars and then head to Arizona for a tilt with the Coyotes on Saturday. 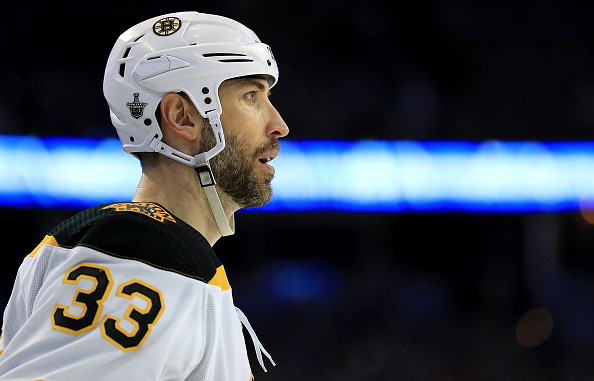 TAMPA, FL – APRIL 28: Zdeno Chara #33 of the Boston Bruins looks on during Game One of the Eastern Conference Second Round against the Tampa Bay Lightning during the 2018 NHL Stanley Cup Playoffs at Amalie Arena on April 28, 2018 in Tampa, Florida. (Photo by Mike Ehrmann/Getty Images)