The Nashville Predators have announced that defenceman Dan Hamhuis is sidelined  indefinitely with an undisclosed injury.

Hamhuis only logged five minutes, 18 seconds of ice time in Tuesday’s loss to the San Jose Sharks. He left in the second period of the game against San Jose. There was no specific incident that caused the injury. However, Hamhuis did suffer a hard hit into the boards in Saturday’s win at the Edmonton Oilers.

The Smithers, British Columbia has one assist in seven game this season. He also added two penalty minutes. His possession numbers were 43.8 percent Corsi and a relative Corsi of -7.3.

Hamhuis has played for the Nashville Predators, Dallas Stars and Vancouver Canucks over his 12-year career. He has put up 59 goals and 285 assists for 344 career points in 1,038 career games. The Nashville Predators originally drafted Hamhuis in the first round, 12th overall of the 2001 NHL draft.

Nashville called up forward Rocco Grimaldi to fill Hamhuis’ spot on the roster. Grimaldi showed that he could be a solid bottom-six forward in the pre-season. Head coach Peter Laviolette said that Anthony Bitetto would slide into Hamhuis’ spot on defence with Yannick Weber.

This is the second injury that the Predators are dealing with as Pekka Rinne is out at least until Saturday. Nashville’s defence gave away a comfortable lead in the loss to the Sharks.

Hamhuis is good lower-end option on one of the best defensive groups in the league. He’s also very experienced, but has struggled at times this season.

Bitetto has always been a strong fill-in option for the Predators for the last few seasons. Nashville is hoping that Hanhuis can come off the IR strong to help them keep up its solid start. 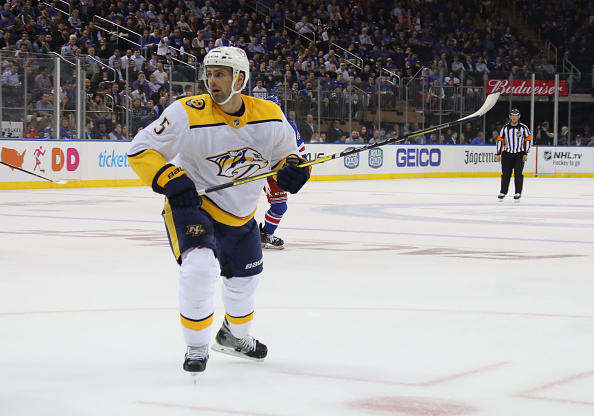