The New York Islanders have named Anders Lee the team’s 15th captain in the franchise’s 46-year history on Thursday. Lee replaced John Tavares as captain, who moved onto the Toronto Maple Leafs in the off-season. Tavares had served as captain since 2013.

Lee has played only for the New York Islanders in his six-season NHL career. He totaled 40 goals and 22 assists for 62 points in the 2017-18 season. The former University of Notre Dame product also added 44 penalty minutes. His Corsi for was 48.0% and Corsi rel was 0.6.

The 29-year-old has scored 124 goals and dished out 83 assists for 207 points in 343 career games. He was originally drafted in the sixth round, 152nd overall by the New York Islanders.

Lee broke the 40-goal mark for the first time last season after he netted a career-high 34 goals in 2016-17. The 2016-17 season was a bounce-back season for Lee after only scoring 15 goals the previous campaign.

Josh Bailey, Cal Clutterbuck and Andrew Ladd are also part of the Islanders’ leadership group this season as alternate captains.

Many expected the Islanders would be captainless for the first time since the 1996-97 season. However, has shown that he can wear the “C” from his on-ice and off-ice activities. The American forward runs the Anders Lee Kancer Jam tournament every year.

The Islanders and Lee are working on a long-term contract extension to keep the Edina, Minnesota native with the club. Keeping Lee on the team will be important for the Isles but naming him captain is a big first step that they are committed to him. 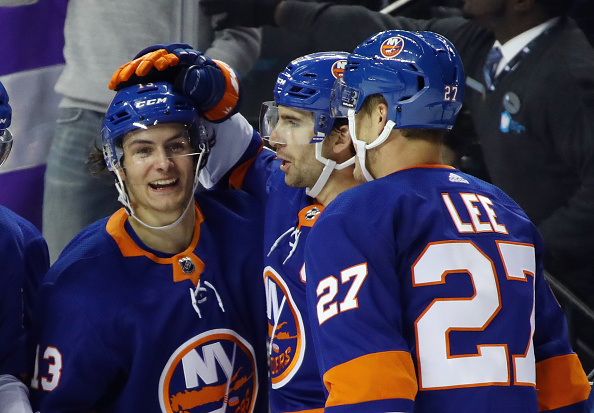 NEW YORK, NY – OCTOBER 30: Mathew Barzal #13 of the New York Islanders (l) celebrates his goal at 17:44 of the second period against the Vegas Golden Knights and is joined by John Tavares #91 (c) and Anders Lee #27 (r) at the Barclays Center on October 30, 2017 in the Brooklyn borough of New York City. (Photo by Bruce Bennett/Getty Images)