The Tampa Bay Lightning have announced that they have placed defenceman Jake Dotchin on unconditional waivers for terminating his contract. The Athletic’s Joe Smith reports the termination is on the grounds of “material breach.”

Sounds like #TBLightning wasn’t happy with Jake Dotchin’s conditioning entering camp. Sure we’ll find out more down the road, but team not expected to comment today https://t.co/tnylLykdPN

Smith goes onto speculate that the team was not happy with Dotchin’s conditioning coming into training camp. The move is the first official transaction of new general manager Julien BriseBois’ tenure since taking over for Steve Yzerman on Wednesday.

He scored three goals and eight assists for 11 points for 48 games. Dotchin also added 38 minutes in penalties. His possession numbers were 52.8 percent Corsi and a relative Corsi of 1.4.

The Cambridge, Ontario native was entering the final season of a two-year, $1.625 million contract signed with the Lightning last summer. He will be an unrestricted free agent once his contract is terminated.

Dotchin was projected for a spot on defence, so the move is shocking. The move will open up a spot and either Cal Foote or Erik Cernak may move up from AHL affiliate Syracuse.

The 24-year-old had an up-and-down season as he was paired with Victor Hedman on the first pair. However, Dotchin had a fair number of healthy scratches during the season. Most of these came after the All-Star Break.

Dotchin seemingly had a bright future with the club, but now faces an uncertain one. He’ll certainly get a look on another team, but this has to be a wake up call. 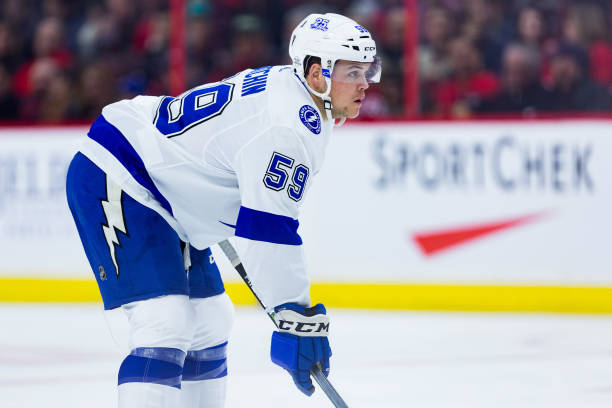