Robert Hagg had an up-and-down rookie season in the NHL. The defense-first defenseman showed some flashes of what he can become as an NHL player. Specifically, Hagg has tight gaps in the defensive zone, an active stick that cuts off passing and shooting lanes, plus physicality, and high-end defensive awareness. There is some offensive upside to his game as well. The example below showcases his puck carrying and shooting skills:

Robert Hagg what a goal pic.twitter.com/djTCWX6Fhf

Hagg senses the open seam in the opponents neutral zone defensive structure and he pounces. Cutting in and around the opposition with ease, he finds open ice at the right circle and fires it into the back of the net. Examples like this were the exception to the rule, however. Often times, Hagg acted as a safety valve for his playing partners. Usually, he takes on the bulk of the defensive duties so his partner can take chances offensively. In the future, some more calculated risks like the example above would help the Flyers diversify their attack from the backline. Keeping the opposition on their toes as it were.

Preventing entries against is one of the ways that defenseman who have trouble with zone exits can limit their time in the defensive zone. Corey Sznajder’s data found that Hagg floundered quite a bit in relation to his peers on that front. Hagg appeared all too comfortable in allowing the opposition to gain entry into the zone. As a result, the other team’s explicitly targeted him on attempted entries. Only Andrew MacDonald allowed a higher percentage of carry-ins than Hagg. Breaking up more plays in the neutral zone would do wonders for Hagg and the Flyers.

The graph above illustrates Hagg’s flaws: difficulty exiting the defensive zone via possession or passing, resorting too quickly to the “safe” play while under pressure, a reluctance to taking calculated offensive risks, and rarely defending the blueline from rushers attempting to gain entry into the offensive zone. Hagg’s troubles with zone exits show itself quite a bit. For example, he leads Flyers defenseman during the 2017-2018 season in Failed Exit% (23.8). Similarly, he had the second lowest exit% among Flyers defenseman (Radko Gudas being the worst). Moreover, Hagg’s possession exit% was the second worst for Flyers defenseman. The previously mentioned metrics paint a stark picture: Robert Hagg performed poorly when attempting to exit the zone.

Alex Novet’s findings from transitional play tracking show that about a quarter of goals against come after failed exits and over 40% of all goals come from “poor” exits. Essentially, zone exits are a vitally important part of the game and Robert Hagg needs to show some improvement in the coming years. The aforementioned weak spots in his game were undoubtedly the subject of his exit interview with Hextall and his staff. Fortunately, these issues are fixable.

Surprisingly, Hagg grades out to nearly average via possession entry%. He has the ability to successfully enter the offensive zone with possession. Hagg just needs to attempt it a bit more. Once in the offensive zone, Hagg tends to take a back seat to his playing partner. This presents itself by his rather pedestrian shot assist numbers. More of an emphasis by Hagg to create some offense is something Flyers fans should look (& hope for).

Hagg’s on-ice metrics were a bit underwhelming. Some of that can be attributed to his usage with a lot of defensive zone starts. However, there is an important caveat to note: Matt Cane’s work posited that on-the-fly shifts account for around 60% of a player’s total shifts. So, it follows that traditional zone start metrics tend to be a bit unreliable. Additionally, player’s who struggle to drive play are given more defensive zone starts by their coaches. Which, in turn, inflates their DZS% (Defensive Zone Start%). Matt’s work reveals that zone starts have a relatively negligible impact on a player’s possession numbers. Knowing what we know now, Hagg’s poor performance by shot/chance/expected goal generation and suppression can’t be explained away by his zone starts.

Emmanuel Perry created a metric to rate players by a variety of factors. This stat combines all factors that a player contributes to in hockey: offensively, defensively, even-strength, and special teams. There is 128 left-handed defenseman in his data set. Robert Hagg ranked 114th. His possession metrics played were a big reason for his low rating. 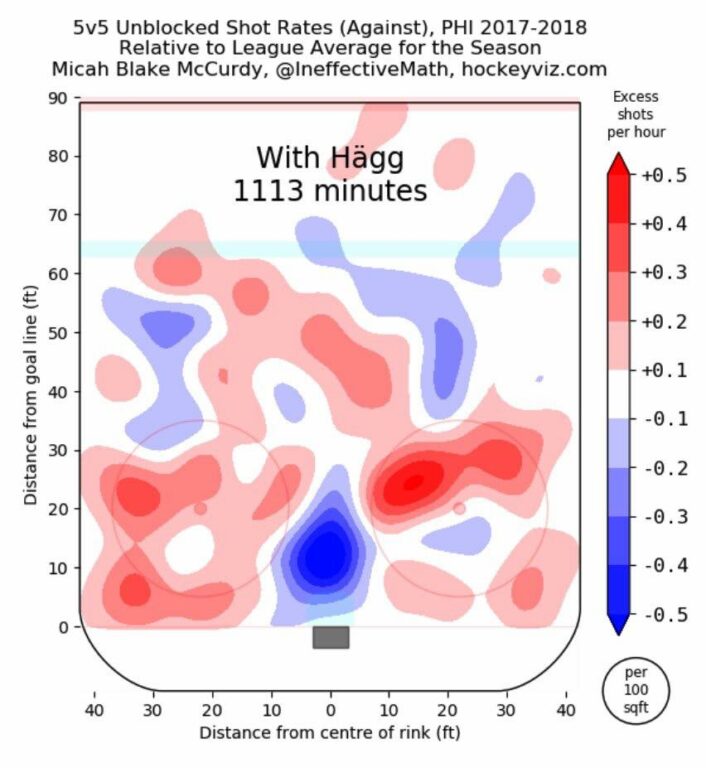 The graphic above illustrates the area of Hagg’s game where he really shines: limiting shots and scoring chances against in the high danger area (the slot). That is a very valuable skill to possess for a defenseman. Hagg’s physicality and stick work contribute to his strong net-front play. What is more, Hagg’s defensive intelligence and tight gap are also evident in his slot play. All of the red elsewhere in the graphic is a bit worrisome though.

What The Future Holds For Robert Hagg

It is difficult to say with any certainty what kind of player someone will be in the NHL after his rookie year. There were some encouraging signs and some that were not so encouraging. Hagg’s work in the defensive zone through his defensive coverage, physicality, and active stick showed up pretty consistently. As most Flyers fans know all too well, Robert Hagg led the league in hits for a large portion of the season. The intimidation factor that brings isn’t to be discounted.

Hard work on his deficiencies will go a long way toward making Robert Hagg a truly effective two-way defenseman. Improving his zone exits, zone entries, zone denials, and by taking more risks offensively are the areas of Hagg’s game that need some fine-tuning. Hagg’s new contract provides him two years to work out these kinks in his play.