Most people consider the Stanley Cup the most difficult trophy to win in North America. Having to win four best of seven series to capture the Cup is extremely demanding. Even though the playoffs tend to bring out the best in the teams, there are no shortage complaints about the NHL playoff format. This past playoff Toronto Maple Leafs fans were upset about how their first-round matchup. Despite finishing with a franchise-best 105 points, they had a difficult first-round matchup with the Boston Bruins. There were some in Winnipeg and Nashville that were upset the two teams were forced to play in the second round, despite having the two best records in the NHL.

The NHL has evolved from a six-team league to a 31 team league since 1967. The NHL had to update their playoff format to adjust to their changing world. For the sake of this article, the formates examined will begin with the Original Six format.

With the league consisting of only six teams, all teams were made up of great players, which made for some amazing games and series. Still, the league was dominated by the Montreal Canadiens in this era. The Habs would win 10 cups during this time. Not far behind the Habs were the Toronto Maple Leafs with nine Cups.

Things stay pretty straightforward with the original expansion years. The NHL doubled in size, adding six new teams for the 1967-68 season. The new teams were the Philadelphia Flyers, Los Angeles Kings, St. Louis Blues, Minnesota North Stars, Pittsburgh Penguins and Oakland Seals, so the playoffs had to expand. The number of teams doubled from four to eight and an extra round was added.

The NHL created two divisions, East and West. The easy thing would have been to try to get these teams arranged by geography, but that’s not what the NHL did. All the “Original Six” teams were placed in the East division while the expansion teams were placed in the West division. The top four teams from each division would qualify for the playoffs. The two divisions acted as conferences. A team in the East will only face a team from the West in the Stanley Cup finals. The NHL maintained the one versus three and two versus four format in the first round. 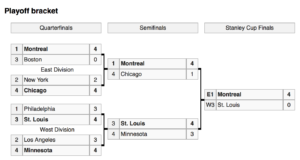 In 1970-71, the NHL expanded yet again. This time only two new teams were added, the Vancouver Canucks and Buffalo Sabres. With the new teams, the NHL decided to re-align their divisions. The East division consisted of the Boston Bruins, New York Rangers, Montreal Canadiens, Toronto Maple Leafs, Buffalo Sabres, Vancouver Canucks and Detroit Red Wings. The West was made up of the Chicago Black Hawks, St. Louis Blues, Philadelphia Flyers, Minnesota North Stars, Los Angeles Kings, Pittsburgh Penguins and the Bay Area/California Seals.

After three consecutive years of non-competitive Stanley Cup finals, the league decided to alter its playoff format slightly. The NHL adopted a crossover for the semifinal. The winner of the one versus three matchup in the East would play the winner the two versus four matchup from the West and vice-versa. While it definitely added competitiveness to the finals, there was a controversy that would result in another format change. 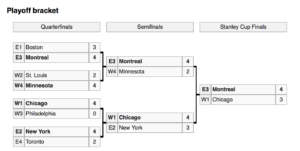 In 1972, the NHL added two more teams, the New York Islanders and Atlanta Flames. The NHL added the Islanders to the east division, while the Flames were added to the West.

The post-expansion format did not last as long as the previous version. The alteration to this playoff format was minor, however. The NHL opted to change the seeding matchup to one versus four and two versus three in the opening round of the playoffs. The change was brought about because the Minnesota North Stars seemed to lose games on purpose to finish in fourth rather than third and avoid playing top seed Chicago in the opening round. While nothing was proved the league wanted to add an incentive for playing to win. The Bruins were also left frustrated as, despite winning their division, they had a difficult first-round matchup, with eventual Cup champions Montreal. 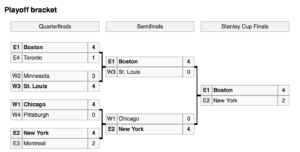 The new structure and format also called for a restructured playoff format. The league upped the number of qualifiers from eight to 12. The teams would be seeded based on their regular season record one through 12. The division winners earned a bye to the quarterfinals, regardless of their actual seeding, while the remaining teams would be seeded one through eight (based on record) and play a best-of-three preliminary series. The top seed in the preliminary round would play the twelfth seed, the second-seeded team would play the 11th seed. The preliminary seeding was needed in case a division winner was ranked lower than the top four. For example, in the 1975 playoffs, the Vancouver Canucks were the ninth-seeded team, but because they won their division, they earned the bye to the quarterfinals.

The preliminary winners would join the division winners in the quarterfinals. The teams would be re-seeded, one through eight for the matchups. There would be another re-seeding in the semifinal round (one through four) to determine the semifinal matchup. 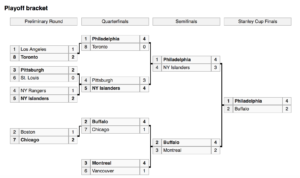 By the 1979 season, the NHL expanded from 17 teams to 21. Four teams had been added from the defunct World Hockey Association. The Edmonton Oilers, Winnipeg Jets, Hartford Whalers and Quebec Nordiques were all entering the league. With the new teams, the NHL decided to expand its playoffs from 12 to 16 teams. The 16 teams to qualify were the four division winners and the remaining 12 best teams. Once qualified, the teams were seeded based on regular season points. Division ranking was not considered. For example, in the 1980 playoffs, the Buffalo Sabres and Boston Bruins were seeded second and fourth respectively, despite playing in the same division. The Chicago Black Hawks won the Smythe division but were ranked seventh.

All teams would now participate in the best-of-three preliminary round. Teams would still be re-seeded for the quarterfinal and semifinal rounds to ensure the top seed played the lowest remaining seed. 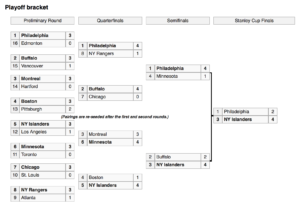 Prior to the 1981-82 season, the NHL re-aligned again in an effort to reduce travel costs. The league would still consist of four divisions and two conferences. The only change was the Norris division would now be in the Campbell conference with the Smythe division and the Patrick division in the Wales conference with the Adams. This re-alignment also changed the NHL playoff format. The old format essentially made the divisions meaningless and the league wanted to emphasize the importance of the divisions.

The only significant update to this format was in 1987. In an attempt to reduce the number of first-round upsets, the league increased the first round series from five games to seven. 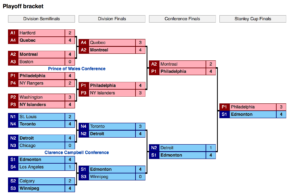 In 1994 Gary Bettman became the NHL commissioner and began making lots of changes. Gone were the Wales and Campbell conferences, in were the Eastern and Western conferences. The division names were also changed from Adams, Patrick, Norris, and Smythe to Northeast, Atlantic, Central, and Pacific. He also altered the playoff format. Gone was the division based seeding replaced with a conference based seeding.

The division winners would be ranked one-two in their conference based on point total. The top six teams remaining teams in the conference would then be seeded three through eights. In the second round, the teams would be re-seeded so the top remaining seed played the lowest remaining seed, within their own conference. 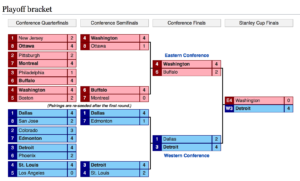 With the Detroit Red Wings and Columbus Blue Jackets moving over to the Eastern Conference, the NHL re-aligned and moved from six divisions to four. With the new alignment brought a new playoff format. The format mixed the old division rivalry format from the 80’s with the conference seeding with a sprinkle of the NFL.

The new format would seed the division winners one-two in each conference. The second and third-placed teams in each division would also qualify. For the final two spots, the NHL introduced two wildcard spots. The two wildcards would be reserved for two best teams that were not among the top three in their division. The wildcards qualify regardless of which division they play for. For example, there can be two wildcard teams that come from the Central division and none from the Pacific. 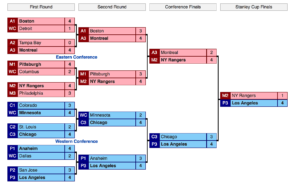 The NHL has not been afraid to change their playoff format. Still, they also can’t seem to find the right balance. The current wildcard format has some issues. The aforementioned Leafs complaint. Toronto had the fourth best record in the Eastern Conference in 2016-17. However, because they finished third in their division, they had to play the Boston Bruins, who had the second best record in the East.

Another issue is having wildcard teams that are extremely strong. In 2016-17, the Montreal Canadiens won their division with 103 points. In the first round, they played the New York Rangers, a wildcard team. The Rangers had 102 points during the regular season. The Canadiens “reward” for winning their division was to play a team that had a season just as good in the opening round.

While it seems too early for the NHL to start changing their playoff format, if more issues like this arise, don’t be surprised to hear a louder call for something to be changed.

Perhaps it’s because of nostalgia, but the best format was the division rivalry format from the 80’s and 90’s. It bred heated divisional rivalries because the teams would play important games in the playoffs almost every season. The battle of Alberta, the battle of Quebec, the battle of New England, the battle of the Keystone state, the battle of New York were all born out of these playoff series. There were other countless rivalries that didn’t get nicknames as well. Chicago and St. Louis or Chicago and Detroit. Detroit and Toronto. Edmonton and Los Angeles. The Islanders and Washington. Montreal and Philadelphia or Montreal and Boston (Although this one dates way back). All of these rivalries were created or elevated because they played each other almost every season in the playoffs. The animosity and intensity of the games were always heightened. It made for exciting hockey.