The London Knights spent the day before the 2017 OHL trade deadline throwing their weight around as one of the league’s perpetual powerhouses. They made three trades on Monday, acquiring forwards Dante Salituro and Mitchell Stephens from the Ottawa 67’s and Saginaw Spirit respectively, as well as defenceman Mitchell Vande Sompel from the Oshawa Generals. 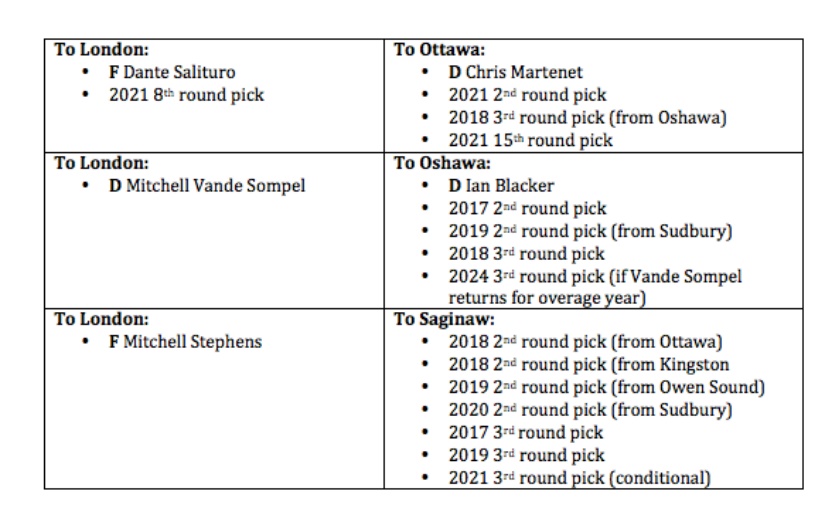 In making these additions, the Knights did subtract veteran 6’7″ defenceman Chris Martenet, who played a significant role in their 2016 Memorial Cup championship. However, trading him makes room for Vande Sompel without taking ice time away from young defencemen like Nicolas Mattinen.

The Knights have dealt away a lot of draft picks, but have managed to hold onto much of their young talent, and have not left the cupboards bare for the future.

Vande Sompel, a 2015 third-round pick of the New York Islanders, has 37 points in 37 games this season for the Generals, and was part of their 2015 Memorial Cup-winning team. A proven OHL veteran, he will strengthen a London blueline that is already led by top offensive defencemen Victor Mete and Olli Juolevi.

The Knights’ addition of a veteran defenceman is similar to last year’s acquisition of overage blueliner Jacob Graves, who performed well in a shutdown role in the playoffs.

Salituro is another longtime OHLer, having played four seasons for Ottawa before moving on to play briefly in the AHL this year with the Cleveland Monsters. Undrafted to the NHL, he signed an entry-level contract with the Columbus Blue Jackets over the summer, but never saw much ice time in either the AHL or the ECHL. As such, the Knights have confirmed that he will return to the OHL for his final year of eligibility.

At 5’8″, Salituro is undersized, but he has a history of scoring in the OHL. Last year, he put up 83 points in 65 games for Ottawa, and for several seasons was one of the team’s most dangerous scoring threats behind Travis Konecny. He may slot in immediately as London’s first line centre or right winger (potentially alongside Stephens), and will add a little extra to their power play.

It was originally rumoured that the Knights would be acquiring Jeremy Bracco from the Kitchener Rangers, but with this creative deal they’ve found the scoring forward they need at a lower price. The Blue Jackets’ director of player personnel, Basil McRae, was previously London’s general manager, and reportedly had a hand in this trade.

Finally, Mitchell Stephens, a 2015 pick of the Tampa Bay Lightning (33rd overall), completed London’s movement on Monday. The former Saginaw Spirit centre is returning from the silver-medal-winning Canadian World Juniors team, and has 28 points so far this season.

Stephens is a workhorse centre in the offensive zone, with a strong skating ability and top-notch foot speed, as well as a physical acumen and slick hands. He’s a very well-rounded player who will help the Knights in all areas.

The Knights have vastly improved with these moves. Prior to adding three major pieces, they were expected to rely on Max Jones and Cliff Pu, which was cause for skepticism. Now, though, London looks like a powerhouse again, with both their offence and defence bolstered by reinforcements.

London is back in action on Friday against Saginaw, and in addition to their new pieces the Knights lineup will be strengthened by the return of goaltender Tyler Parsons from Team USA at the World Juniors, as well as the likely return of Jones from injury.

Full Stats for All Three Acquisitions: