(Podcast) – Tonight, Matt, Russ, and Ty take a look back at American soccer history with soccer maven Steve Holroyd, of Philly Soccer Page. They look back nearly a century when the American Soccer league were poaching top players from Europe, and Bethlehem Steel FC walked the earth creating their own footballing dynasty right here […]

Standing in the Shadow of History: Bethlehem Steel FC

Sport, Politics and the Rio Olympics

With the 2016 Rio Olympics now just one year away, the crescendo of media, marketing and public interest will dichotomise its veracious newsfeed, between stories of triumph and hope to the forbearing of poverty and pollution as the axiom of not mixing sport and politics is hung out to dry.   For as long as […]

The view from the cheap seats hears there is now evidence that Pete Rose gambled as a player in 1986, so what?! Did you think he just rolled out of bed a couple of years later, as a manager, and said “Let me try this gambling on baseball thing”? Of course not. We all knew […] 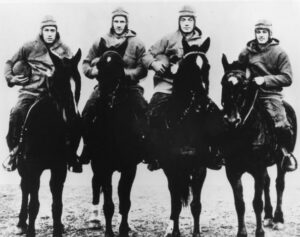 If you are a fan of Sports History, check out the other articles I have written in my column Peculiar Side of Sports. The Hail Mary—not just any old play, but rather one that that tells a story of desperation and hope. The mere mention invokes a feeling like no other in sport. Doesn’t every […]

With less than 100 days to the start of the 2015 Rugby World Cup, Last Word on Sports looks back at how the participating nations have fared in the previous seven tournaments from the inaugural in 1987 to the most recent in 2011. Today’s focus is Samoa, who have appeared at six of the seven […]

New York, NY (June 20th, 2015) – For Jeffrey Bell, Philadelphia sports are a natural attraction. As a Delaware Valley native, he was raised on it. Even after he moved to California to persue a music and production career, Philadelphia sports stayed with him. “If Philadelphia had a checkers team, Philly sports fans would follow […]

(PODCAST) – Treble Radio proudly welcomes Swansea City Vice Chairman, Leigh Dineen, and executive producer to the film “Jack to a King”, Mal Pope joining us. Leigh and Mal discuss the current state of Swansea, the reason to make the film about their past, and what it means to them. We also talk about how […]

FIFA, the IOC and NCAA: The Hunger Games

FIFA, the IOC, and NCAA all profit from ugliness in sport, but nothing is more venal than punishing the young for their innocence, vigor, and beauty.

Sixty-seven and a half thousand people had gathered at Wembley Stadium, London to cheer on an England team in a World Cup Semi-Final. The hopes of a nation rested upon 17 great men and with 20 seconds to go England fans were still dreaming of a World Cup Final. Sadly it was not to be […]

The 26th of April marked what would have been Nevin Spence’s twenty fifth birthday. The young Ulster player cruelly taken from his family with his father and his brother. His sister only narrowly escaped the horrific events on his family farm in County Down.

Whenever one reads about the latest football player donating a sum of money to a charitable cause, one can’t help but cynically question his — or his publicist’s — motives. In an age where players are earning up to £300,000 per week, there is growing resentment from fans who can’t relate to the ever-climbing astronomical wages being commanded […]

Imagine if you will a cold Yorkshire night. Imagine you are settling down to enjoy a nice evening meal and next to you a group of well spoken gentlemen are talking about rugby. Now imagine its 1890 and the most incredible story has just begun. The Barbarians Rugby Club was formed. This week marks 125 […]

The Basketball Hall of Fame announced its 2015 inductees this week, and with the induction of Dikembe Mutombo, the Hall seems to continue to be rewarding great defense. Among the others chosen for induction were former players Spencer Haywood, Jo Jo White, and Lisa Leslie along with college coach John Calipari and referee Dick Bavetta, […]

Peculiar Side of Sports: Who was Hobey Baker?

Welcome back to Peculiar Side of Sports. Every so often something in sports perplexes me. So, I do what any normal, sane sports fan does – I search ad nauseam for the answer by any means necessary. The good news is that I take all my hard work and relay the results to you. If […]

How Have Some Recent Mid-Season Managerial Appointments in the Premier League Turned Out?
Last Word Staff - Apr 8, 2015