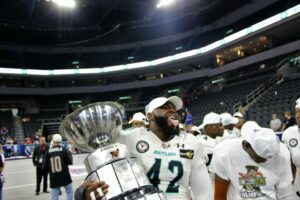 The Arizona Rattlers lead the six-time defending Indoor Football League (IFL) Champion Sioux Falls Storm by six points with 50 seconds to play. The Rattlers were just stopped on three straight downs, before bringing in Sawyer Petre to attempt a 28-yard field goal. The Denny Sanford Premier Center crowd was as loud as it had […]