Football is back. It is finally everyone’s favorite time of year when you and your friends gather around and begin your first of three fantasy football drafts the week before the regular season starts (don’t want to draft too soon risking injury to your first-round draft pick in the preseason). Only one thing stands in your way – Melvin Gordon, your star running back and top points scorer, is holding out to get a new contract with the Los Angeles Chargers. That’s OK – Ezekiel Elliott is a great second option. What? Oh, right. He’s joining Gordon and others as NFL holdouts to become the highest-paid running back in the NFL.

Both Gordon and Zeke followed in the footsteps of Le’Veon Bell this off-season and threatened to sit out the NFL’s 100th season in order to get paid. But to what benefit. Yes, Bell sat out the entire 2018-2019 season with the Steelers who quickly realized they could get comparable productivity from James Conner just to prove that he was worth more than they were offering – and yes, he got paid. But to what avail? Bell winds up on the New York Jets as one of the few star players on the team’s young offense. However, already going into the fifth weekend of the NFL regular season, Bell has put up pedestrian numbers although receiving a large workload with quarterback Sam Darnold out with mononucleosis the last three weeks. On 71 attempts through the Jets first four games (Week 4 Bye), Bell has only managed 206 yards rushing and has a season-long rush of… wait for it – 13 yards. His receiving stats aren’t anything to write home about either with again, an impressive 27 receptions on 32 targets but for only 166 total yards and one touchdown.

So yes, Bell got paid the $61 million max deal he believes he deserves ($35 million guaranteed), but lines up each week behind arguably one of the worst offensive lines in the NFL. What’s the money worth? Worth more than the potential to win one, two, three Super Bowls? What about the longevity of his career? Lining up behind the offensive line that has given up 23 sacks in four weeks of play isn’t doing anyone any favors.

Nonetheless, Melvin Gordon and Ezekiel Elliott followed suit. Zeke got paid – big time with a six-year, $90 million contract extension essentially guaranteeing him a Cowboy for life. Gordon did not and rejoined the team after Week 3 after the team denied his request to be traded – at least this season.

Of course, we would be naïve to think that the NFL holdouts would begin and end with running backs, wouldn’t we? Shortly into the regular season, Jacksonville Jaguars cornerback Jalen Ramsey demands a trade after a sideline altercation with head coach Doug Marrone during their Week 2 matchup against the Houston Texans. But what does Ramsey want? Money? A team that he sees he fits better with?

Fast-forward four weeks through Week 5 of the regular season and Ramsey has not rescinded his request for a trade (in fact, has doubled-down), was on the sideline for the Week 4 victory in Denver, and was also out with a back injury in the Week 5 loss to the Carolina Panthers. The team’s owner, Shad Khan, has reiterated that the team is not interested in trading Ramsey anytime soon as he stated that “…I think right now the best thing is to have him be a part of the team”.

Just hours before kickoff of Week 5 with the seemingly blundering Los Angeles Rams visiting the rising Seattle Seahawks, one of the top receivers in the league, Stefon Diggs, has voiced his discontent with the Minnesota Vikings organization and overall performance as of late after not participating in the team’s practice session Wednesday afternoon.

While Diggs has not held out yet, one can’t necessarily blame him for his frustration nor would anyone be surprised if he does sit out beginning this Sunday when they visit the Meadowlands and the ailing New York Giants as he is only second on the list of players with the biggest negative difference in targets through five games in the last two years (min. 10 targets both years) with -24. The only other player with fewer targets? The guy who lines up opposite him on the field every week – teammate Adam Thielen with -34.

Naturally, there are many factors at play when considering a player’s wishes for a trade. The player’s value, the organization’s circumstances in relation to its depth chart, and, maybe most importantly, preventing the expansion of the almost cry baby-esque culture that is sitting out when a player isn’t getting what they want.

This season has seen more NFL holdouts than any season prior and it is up to each of the 32 teams to determine if keeping a holdout player active on their roster throughout an entire season will end up benefiting the organization long-term.

While NFL holdouts are not a new concept to professional sports, only time will tell how each case impacts both the organization and the player. 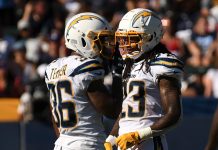