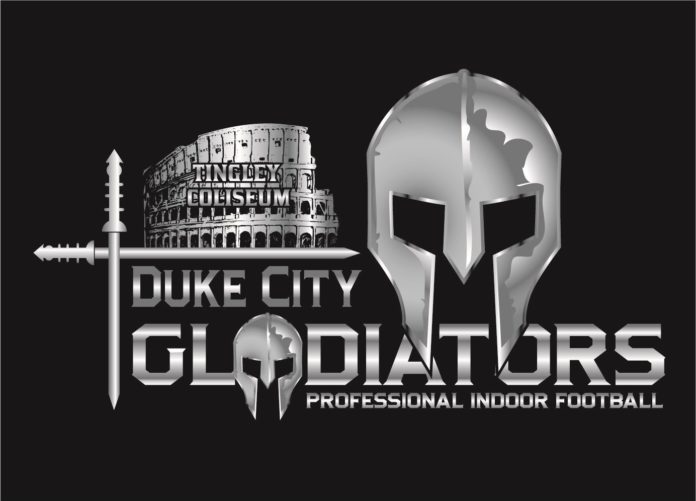 As we reported on our Twitter account and first reported by Richard Tieman of The Fan Show the Duke City Gladiators (Albuquerque, NM) currently of Champions Indoor Football, will move over to the Indoor Football League for 2020.

The Gladiators have had a bit of a tumultuous history in their short existence. The club was founded in 2015 (the first season of the CIF) as a replacement for the New Mexico Stars, who bailed on the league shortly before the season.

That season playing a short schedule, Duke City would go 5-4 with a record that included a forfeit victory over the Salina Bombers who had been ejected from the CIF a little over a week before that game was to have been played.

Year two would see the Gladiators go 6-6 before making the playoffs as the four seed with a 7-5 record in 2017. 2018 saw Duke City go 10-2 en route to their first CIF Champions Bowl title and 2019 saw them repeat as Champions with a 9-3 regular season record.

The move to the IFL will provide a steep step up in competition for the Gladiators as witnessed by Bismarck and Quad City who both moved in to the IFL in 2019 from the CIF. The Bucks went 5-7 in the CIF before finishing at 2-12, only ahead of one win teams Cedar Rapids and San Diego in their first IFL season.

Quad City was a little more successful on the field, after finishing 8-4 in their only CIF season under former Beef head coach Cory Ross they went 6-8 just missing the playoffs in the IFL in 2019.

Per our sources a few other teams are also looking into making a move to the Indoor Football League.

Amarillo, Salina, and Wichita have all been mentioned as possible teams to leave the CIF for the IFL. If that were to happen the CIF would be down to just three teams in Oklahoma (Enid), Omaha, and Sioux City.

If the CIF were to go under Sioux City Bandits owner Bob Scott has publicly stated that it is unlikely that he would move the team to the IFL which would more than likely result in folding the Bandits.

Stay tuned into Last Word on Sports Indoor Football for the most up to date information about what will be going on in the 2019-20 AFL, CIF, IFL, and NAL off-seasons.