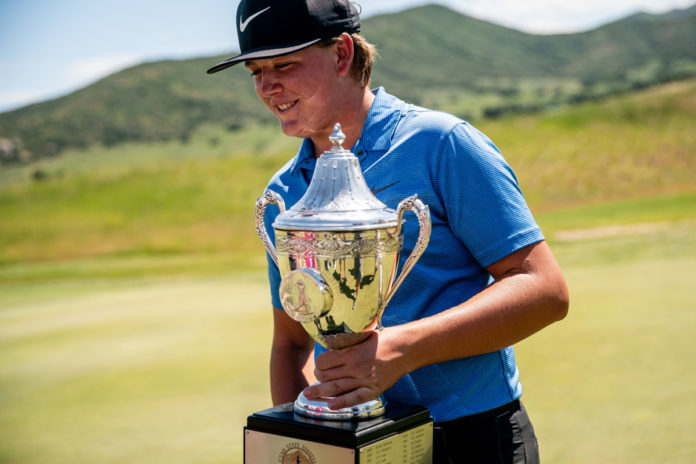 By way of an incredible recovery shot on the 35th hole, Preston Summerhays, the 208th ranked amateur in the world, defeated Bo Jin 2 & 1 to win the 2019 U.S. Jr. Amateur at the Inverness Club in Toledo, Ohio.

Preston Summerhays is not human. But by rule he is the 2019 #USJuniorAm champion. Here’s how he did it. It was ridiculous. ? pic.twitter.com/Dwrgtl8hDn

Summerhays found himself right of the 17th fairway with his tee shot and left himself in a seemingly impossible place with Jin in the fairway. Summerhays pulled off possibly the best shot in all 2019 USGA Championships sticking an approach shot to 10 feet and rolling in a birdie to putt to win the hole and the championship.

Big putts down the stretch for Preston Summerhays

Summerhays made two birdies on the 28th and 29th holes of the match to grab a 2-up lead on the back nine, but it wasn’t birdies that maintained his lead, instead it was long par and bogey putts that kept the pressure on Jin and allowed Summerhays to keep his lead.

On the 33rd hole, Summerhays made a 12-foot par putt after leaving his birdie putt woefully short to halve the hole and remain one up and did the same on the 34th, but this time it was a 20-foot bogey putt that put pressure on Jin.

There’s an alternate reality in which we’re tied on the 35th hole. But not in this reality. Because Preston Summerhays did it again … and got some help. Tune in to @FS1 for the #USJuniorAm conclusion. pic.twitter.com/Z9NY82JkSt

After badly misjudging a wedge from the fairway and leaving his first chip shot short, Summerhays found the green with his fourth shot and calmly rolled in yet another long putt to save bogey. Jin followed with an uncharacteristic three-putt that kept Summerhays in the driver’s seat going to the penultimate hole.

The 16-year-old from Scottdale, Arizona was dialled in all week, but when he made mistakes his putter bailed him out and it did so in a big way on the back nine of the championship match.

Down, but not out.

Coming from beyond was not a foreign concept for Summerhays this week at the Inverness Club. He battled all the way back from three down after 16 holes in the morning 18 of the championship match. He made a long putt for birdie on the 17th and another birdie on the short par 4, 18th, to get two holes back before the afternoon portion of the 36-hole championship.

The trend of come-from-behind wins began earlier in the match-play bracket. After beating Akshay Bhatia, the No. 4 amateur in the world, in the round of 16, Summerhays trailed in both his quarterfinals and semifinals matches.

In the round of eight, he trailed to Austin Greaser 3-down on the 12th tee before winning five of the final seven holes to win in 2-up fashion. Then against Joseph Pagdin in the semifinals, he quickly fell behind 2-down on the front nine and then rattled off six wins in eight holes to win 4 & 3.

The win is part of an incredible summer and, more specifically, the month of July for Summerhays. Last week, he successfully defended his title at the Utah State Amateur Championship becoming the first golfer to go back-to-back since his uncle, Daniel Summerhays, did it in 2000-2001. Naturally, Summerhays found himself in an early hole in that 36-hole final as well but ultimately birdied 13 of the 30 holes he played and won 7 & 6.

This summer, nobody has been able to beat Summerhays in match play, and that remains true as he is the last one standing at the Inverness Club as the 2019 U.S. Jr. Amateur Champion.