The first three games of the NBA Finals are now complete as the Golden State Warriors and the Toronto Raptors will return to Oracle Arena to battle it out in game four. With Toronto claiming the first game of the series at home, they instantly proved to the Warriors, and the rest of the league, that they are here to compete. The Warriors answered right back by taking game two on the road after going on a 20-0 run early in the second half.

Game four of the series will be an extremely pivotal moment. Played in Oakland, this will be the Warriors’ last chance at home to take another win before returning to Toronto. If Golden State can secure the win in game four, they put themselves in a very good position moving forward in the series.

The home court advantage for the Warriors in game four is huge. At home this season, Golden State is 30-11, which is one of the best home court records across the league! In the last 30 games between these two teams, the Warriors hold the advantage with a record of 21-9. Because of these factors, there is no doubt why 888Sport.com, a premier online betting site for the NBA, has the Warriors favored to win!

When looking at the Raptors, some of the biggest contributions so far have come from Pascal Siakam, Fred VanVleet, Kawhi Leonard, and Marc Gasol.

Siakam, a candidate for the Most Improved Player award, was the shining star in game one of the NBA Finals. Shooting 14-17 from the field, Siakam finished with 32 points, 8 rebounds, 5 assists, 2 blocks, and a steal – a truly dominating performance.

Although Siakam was able to shine in game one, the Warriors, led by head coach Steve Kerr, were able to make defensive adjustments and lock up Siakam. They were able to hold the Most Improved Player candidate to only 12 points on 5-18 shooting.

Aside from defending Siakam, the Golden State Warriors have been able to make adjustments after every game to help lead them to more future success. Some of the more noticeable adjustments made were the improved ball movement and the lockdown defense.

The other splash brother, Stephen Curry, has also been lights out this series. In game one, Curry really stood out, looking like a man against boys, dropping 34 points, 5 assists, and 5 rebounds. Unfortunately, it still was not enough for the win.

With all of that in mind, and knowing that this is Golden State’s last home game before returning to Toronto, the Warriors are in a must-win situation. If history proves to be correct,
the Golden State Warriors should take the game with ease. 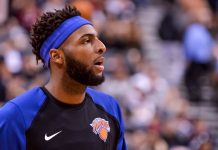 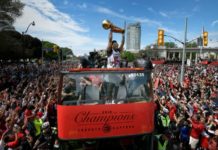