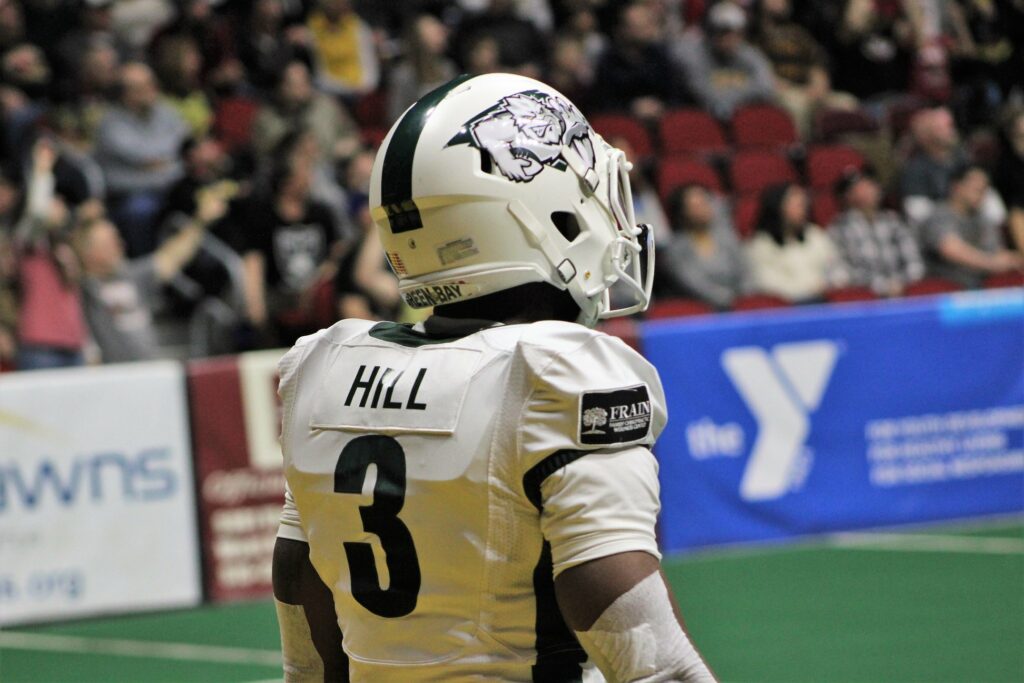 It was the biggest upset of the Indoor Football League’s first full, five-game weekend of action.

The Green Bay Blizzard made a miraculous 15-point run with less than a minute to play to defeat the Quad City Steamwheelers 29-26 on the road in Moline.

The win, especially in the late moments, included a plethora of second-efforts on both individual plays and second tries following flags that brought a call back.

“I’ve never been a part of a game like that,” veteran B.J. Hill said. “It was looking grim for us for a while. That’s one of the feelings that is kind of unmatched, to steal a win like that.”

The result gives the Blizzard a 3-2 record five games into the young season – that’s their best start since 2012.

To put some backing to that, the last time Green Bay got off to a start like this was also the last time the team qualified for the IFL playoffs.

However, this time around, it’s a bit different according to Hill.

But this young squad is making noise this year. Enough noise that the playoffs could be calling when we check back in in 11 weeks.

It bodes well for fans of the Blizzard to see the IFL playoffs expanded back to six teams for the 2019 season, too.

The team sits in a playoff spot after six weeks of action with big wins over Nebraska and of course Quad City to start and end the month.

What makes this team a playoff threat, though? That would be the defense.

The unit not only forced Steamwheelers quarterback E.J. Hilliard to throw his first interception of the season on Friday, but also is the only defensive group to keep him under 100 yards passing in a game – and he only had 59.

“Our defense played outstanding,” Hill said. “Quad City has a really good offense. They’ve been putting up a lot of points. For our defense to stymie them like that and give us an opportunity to put the ball in was great.”

The offense is coming along, too. Under the leadership of Hill and new quarterback Lenorris Footman, they are putting together something unique up north.

The Blizzard are finding their identity.

“The idea is to be versatile,” Hill said. “We want to be able to put the ball in different guys hands, to run the football, to pass it, and make defensive coordinators have a tough time game-planning for us.”

A big part of that identity aspect, for Green Bay, is playing the game a bit differently than teams have in the past.

They want to get first downs.

“First downs equal touchdowns,” Hill said. “The league, typically, in the past is look for the big play. That’s a lot of what indoor football is. We want to dial it down a bit. We want to make defenses stop us with six, seven, or eight play drives. We want first downs to turn into touchdowns for us and that’s kind of our mentality.”

They are taking it one small step at a time, and if the playoffs are going to become a realistic goal for Green Bay for the first time since 2012, that’s what is going to have to happen.

“The mindset just has to be one week at a time, for us,” Hill said. “I think we are embracing that approach. We embrace one practice at a time. Because of this league and because of the smaller rosters, you have to take it one day at a time. You just don’t know [what’s going to happen].”

Last Friday was Green Bay’s, “Prove it,” win – to make it known they belong with the top half of the teams in the league.

But, this Friday, they’re going to have to prove it again.

Green Bay and Quad City will face off for the second straight week in what is another pivotal matchup when it comes to shaping the playoff picture.

A win can separate the Blizzard from Quad City by a pair of games and put them in the top six by the same margin.

“It’s always hard to beat a team twice, let alone back to back,” Hill said. “We have to go back and look at the stuff that we made mistakes on and try and capitalize on those things. We have to play well at home. If we do those things, we can get win No. 4.”

The Resch Center will play host to the matchup this time around kicking of at 6:05 p.m. on Friday night. As always the game will be live streamed on YouTube, and we’ll have live updates on twitter at @LWOS_IndoorFB.