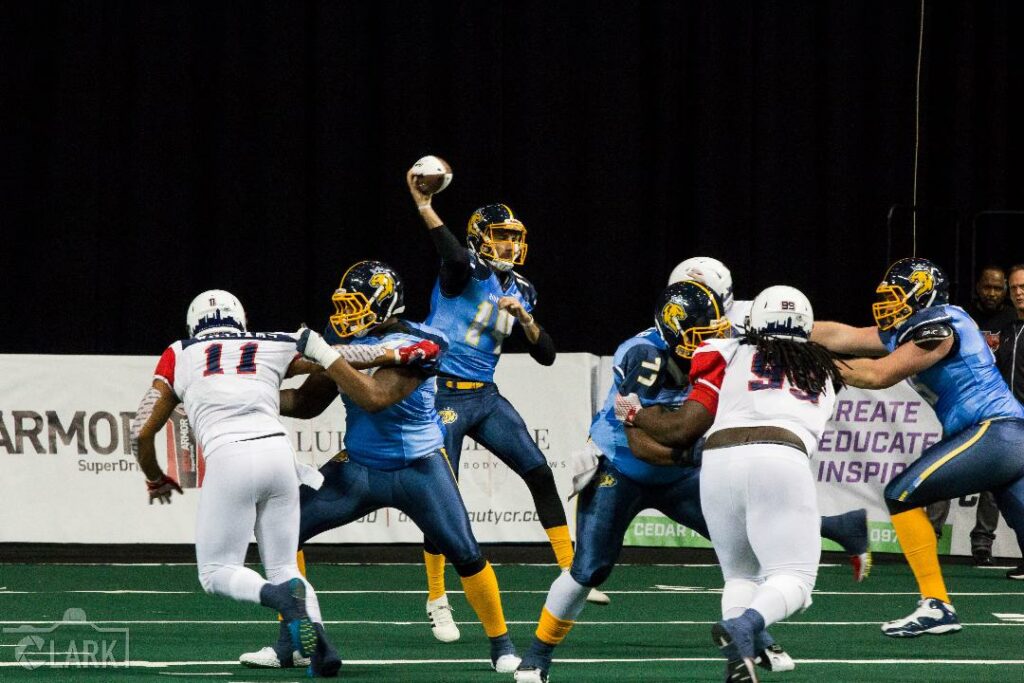 I was going to write this column two weeks ago, following the River Kings’ 47-44 loss as time expired to the reining United Bowl runner up Sioux Falls Storm.

Cedar Rapids showed a different kind of fight than they have the past two seasons.

The team looked crisp, the uniforms looked top notch, and the crowd has come as far along as one could hope for after seeing a combined four wins in two years.

Not to mention, coach Mark Stoute finally seems to be back where he belongs.

Although, I’m almost glad I didn’t.

There’s no moral victories for this team.

“I’m not a big believer in moral victories, personally,” Palandech said. “I look at each play individually and try to learn something further. There were some good plays out there and definitely some positives, but when you lose a game, you obviously made too many mistakes.”

Fast forward to this past Saturday.

The win is a big step in the right direction.

“Winning always helps, no matter what position your organization is in,” general manager Ryan Eucker said. “After having the first two weeks of the season against Sioux Falls and Arizona – which I don’t think anybody will deny will certainly be there in the post season – it’s big to come back and have a big game. We’re looking forward to hopefully carrying that momentum to this weekend.”

That’s what fans are looking for.

They’ll want momentum, they’ll want the wins, and the more people in the arena to see those wins, the better off the River Kings are.

So far, according to Stoute, it seems like one big reuinion.

It’s like you’ve been away at a four-year college and now you’re coming back home. They’ve welcomed us back with open arms.”

Wins have come at a premium lately in Cedar Rapids, so to get the monkey off the back so early in the year was big for the team.

That went beyond the front office and hit home with Palandech.

“[It] definitely [felt special],” Palandech said. “We needed that one. It feels great being able to put one in that win column.”

For Stoute, it was his first win as a head coach since he coached the Nebraska Danger to a win on the road against the eventual league champion Iowa Barnstormers.

“You know that was a big win,” Stoute said. “We came off a blowout loss in Arizona where we made a lot of mistakes and hoped to bounce back. For the guys to execute and on top of that, win, was a great thing.”

And, there’s more reasons to be excited.

Palandech looks to be a solid option at the quarterback position.

Against San Diego, he threw 13 completions on 17 attempts with 143 yards and five touchdowns. The former UNLV Runnin’ Rebel now sits second in the league in end-zone completions.

“[Palandech’s] been very solid for us,” Stoute said. “He’s smart, he’s invested in the game. He doesn’t make a lot of mistakes. He’s really starting to come along.”

However, the River Kings have an intriguing team around the quarterback as well.

The running game is there. Nathan Chavious sits second in the league with 183 yards on the ground for Cedar Rapids. He added three touchdowns on Saturday, too.

“These guys are all working hard. I would say even in the four years I was here before, I would be hard pressed to find a group that could outwork these guys. They really want to learn and that’s truly a joy for a coach – when your team is ready to work every day and they want to get better.”

Marquel Wade was one of the returning players on the team, and his pair of touchdowns made him look even better than he was last season – if that’s possible.

Palandech’s even got an offensive line in front of him that allowed zero sacks against San Diego.

“The offense as a unit really executed at a high level and it showed. We were able to move the ball pretty much every drive and our execution was higher than it was in any previous game.”

Credit that to Stoute.

When Eucker was looking for a coach to run the team in Cedar Rapids, it was evident he needed someone with the connections to turn things around quickly.

“This is more or less an expansion team,” Eucker said. “We only signed a couple players back from the roster from last season. Coming into this season we had a very young group of guys. Kurt was a guy that we saw on film and had some contact with. We certainly liked what we saw when it came to his contact and versatility and ability to throw the ball and serve as a runner [as well].”

That’s exactly the potential that this team serves up.

They’ve got another test coming, too, Friday night against Quad City.

“We’re excited, but we’re not going to drool on it in a sense,” Palandech said. “We’ve got a long season and we’re going to try and do what we can to keep that going.”

What goals are there to be had for a team with little success in years prior, though?

Stoute said his team was focused on making it to what he calls the, “Second season.”

“For us, we want to win and we want to get in the playoffs. That’s our number one goal here. Once we get in, then we’ve got a chance to compete,” Stoute said. “At that point in time, it’s a matter of executing and making sure that if we are going to get beat, not to beat ourselves.

“Hopefully by then we’ll have the mental aspect down [to not make mistakes] and we’ll be a tough team to handle coming down the stretch,” Stoute said.