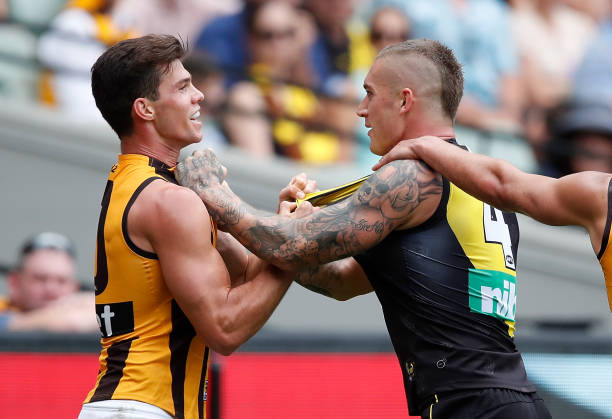 The AFL finals series for 2018 kicks off Thursday with defending flag winners Richmond taking on a red hot Hawthorn side at the MCG. The other double elimination game is West Coast taking on Collingwood in Perth. The loser of Melbourne vs Geelong and Sydney vs GWS Giants will be eliminated.

Richmond vs Hawthorn (Thursday at the MCG)

Richmond narrowly won the MCG clash between these teams this season, as part of a winning streak at the home of football that dates back to last season. Hawthorn is in great form overall though and with James Sicily and James Frawley returning to strengthen their backline they will be full of belief they can score a significant upset. The Tigers swap in Kane Lambert for Brandon Ellis and should continue to rely on a complete team effort to secure victory. Richmond’s defensive pressure, Coleman medalist Jack Riewoldt’s presence up forward, a midfield led by Trent Cotchin, and Dustin Martin, and Richmond’s small forwards that play their role perfectly are keys. Likely Brownlow winner Tom Mitchell leads Hawthorn, but the likes of forwards Jack Gunston, and Luke Breust, midfielder Jaeger O’Meara, and ruck Ben McEvoy will have to perform their best for an upset result. This should be a close game with Richmond’s experience leading them to a win. Richmond by 9

Melbourne vs Geelong (Friday at the MCG)

Jack Viney should return for Melbourne as they battle a star studded Geelong side on Friday night. The Gary Ablett and Tom Hawkins led Cats swept the season series against the Dees by a combined margin of just 5 points. This game could also turn into a final thrillers as Clayton Oliver and Max Gawn should be able to match the best of Geelong. For as strong of a season Melbourne has had, I’ll back Geelong’s experienced leadership to help them get over the top, this is a side built for finals. Geelong by 14

Sydney vs GWS Giants (Saturday at the SCG)

Luke Parker and Lance Franklin will be key returning stars for the Swans as they play a finals derby against GWS for the right to stay alive in finals. Toby Greene and Brett Deledio likely return for the Giants who were swept by Sydney this season. Sydney hasn’t been great at the SCG this season but I back their form over the Giants, who are talented but inconsistent. Sydney by 23

Two surprise packet teams this season with West Coast winning the only h2h matchup by a wide margin (at the MCG no less). The Eagles have been great in their Optus Stadium home this season and despite injuries they finished second on the ladder. Key forward Josh Kennedy looks set to return while Collingwood continues to have fitness question marks hanging over key players Darcy Moore, Adam Treloar, and Jeremy Howe.

Collingwood has been great this season while dealing with their own injuries, but playing in Perth is tough and the Eagles have had too strong of a season to overlook them now. Eagles by 28