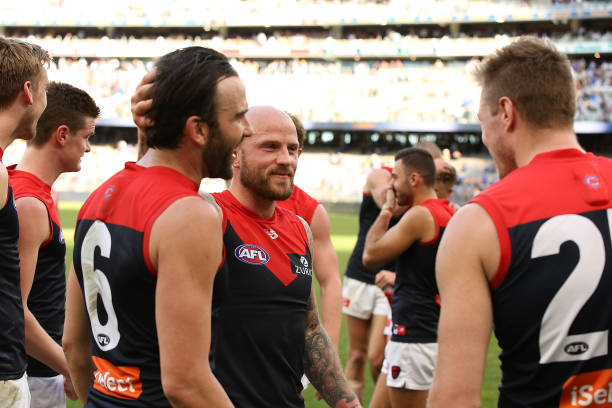 AFL Round 22 is in the books and here is your look at everything that happened in a pivotal round.

Geelong Has a Record Setting Win Against Freo

In a game so lopsided they won’t soon forget it, the Geelong Cats moved a win away from finals with a 158-29 drubbing of Fremantle in Geelong. The Cats set a record for consecutive goals kicked with 23, as Freo didn’t kick a goal after the first term, a term they actually led. It was Geelong from there as 6 goals from Tom Hawkins and 4 from Brandan Parfitt piled on the misery for Docker fans and players alike. A large number of Cats got in on the action, as Tim Kelly bagged 3 goals, while Patrick Dangerfield, who did not kick a goal, led from the midfield and both Gary Ablett and Ryan Abbott had fantastic games. Geelong reaches finals with a win in round 23. Other than Nat Fyfe, Freo were poor all around.

North Melbourne and Essendon Eliminated from Finals Contention After Losses

The run to finals finally came to an end for two Victorian sides over the weekend. The Adelaide Crows held off a North Melbourne comeback to claim an 86-77 win, serving as the spoiler at home. The Crows midfield dominated the game and their goal kicking helped them lead throughout. Both Matt Crouch and Rory Laird were over 40 disposals,  while Josh Jenkins booted 3 goals. Trent Dumont and Jarrad Waite were best on ground for the Roos, who had a great season but came up short late in the year.

Richmond claimed a minor premiership and eliminated Essendon from Finals with an 81-73 win where they also staved off a comeback attempt by the underdogs. Even with a wounded side the Tigers played hard generating more scoring chances. Dustin Martin and Josh Caddy stepped up, combining for 8 goals, while Martin led the Tigers disposal count. Daniel Rioli laid 7 tackles. For Essendon best on ground were Devon Smith, David Zaharakis, and Cale Hooker.

Melbourne finally defeated a top 8 side, winning on the road at Optus Stadium over West Coast 108-91 thanks to a late push that got them over the top. The win for Melbourne puts them in Finals for the first time in 12 years with Angus Brayshaw, Max Gawn, and 4 goal scorer Jake Melksham the difference makers. Mitch Hannan and Tom McDonald combined for 6 goals. The Eagles were led by Dom Sheed and Willie Rioli, but they have to be worried about their finals chances with so many key players missing. The Dees have an outside shot at a top 4 finish.

Collingwood, Hawthorn, Sydney, GWS Giants, and Melbourne Will Contest the two remaining top 4 spots in round 23 after all but GWS claimed round 22 wins. The Sydney Swans beat the Giants 80-60 thanks to a strong 4th quarter run where the Swans came back from 20 points down. Luke Parker stepped up huge up for the Swans while Buddy Franklin booted 5 goals and Jake Lloyd was also solid. Parker’s performance was perhaps his best of the season. The Giants got good games from Tim Taranto, Callan Ward, and Dylan Shiel, but their backline is in poor shape.

Collingwood dominated Port Adelaide and put the Power outside of finals contention barring a surprise in round 23. The Pies beat the Power 115-64 largely thanks to a dominant run of scoring chances. For Pies kicked 2 goals including Jordan De Goey, while Brodie Grundy, Steele Sidebottom, and Taylor Adams were huge, along with forgotten man Chris Mayne. Justin Westhoff, Ollie Wines, and Paddy Ryder were best for Port, but they have collapsed down the stretch.

Hawthorn snuck past St. Kilda 80-76 as the final term saw no goals for the Hawks and just one for the Saints. Jack Gunston booted 4 goals while Tom Mitchell again led the disposal count, James Worpel and Ben McEvoy were also huge. The Saints were led by Jack Steele, Seb Ross, and 4 goal kicker Jack Lonie.

Collingwood and Hawthorn are currently well positioned to maintain the 3 and 4 spots on the ladder while Sydney, GWS, and Melbourne are on the outside looking in.

In the non-impactful games this weekend the Western Bulldogs and Brisbane claimed wins. The Dogs beat a Carlton side with no spark 66-49. The golden four for the Dogs, Josh Dunkley, Jack Macrae, Marcus Bontempelli, and Lachie Hunter were their best. Lin Jong booted a pair of goals while Kade Simpson, Patrick Cripps, and Ed Curnow were best for the hapless Blues.

In the Q Clash the Brisbane Lions slipped past the Gold Coast Suns 78-74 despite the Suns leading early in the final term. Alex Sexton kicked 4 goals for the losing Suns while Brayden Fiorini was also competitive. The Lions were led by Dayne Beams, Stefan Martin, and Allen Christensen.