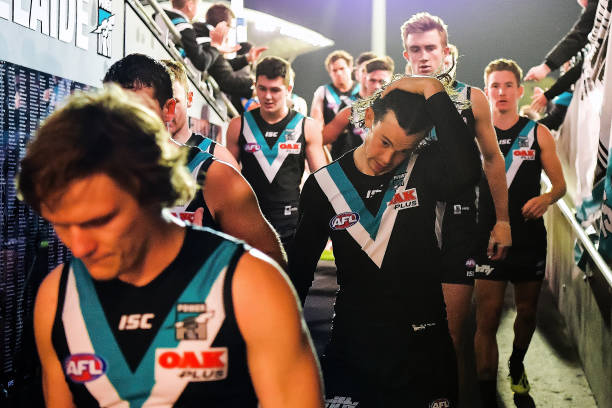 AFL Round 21 is in the books and now there are just two rounds to go until finals. Here is your look at all the action.

Richmond and West Coast will get the benefit of double elimination in the upcoming AFL Finals series. Richmond blew away the Gold Coast Suns 125-51 dominating the game and moving one step closer to securing a minor Premiership. Jack Riewoldt booted 10 goals to tie the Coleman medal race while Josh Caddy kicked 4. Dustin Martin and Trent Cotchin were also influential while Brayden Fiorini, Jack Bowes, David Swallow, and Jarryd Lyons were best for Gold Coast.

West Coast beat Port Adelaide at the siren 62-58. The Eagles trailed the entire game until Jeremy McGovern caught a mark and kicked the winner to defeat Port Adelaide, the Eagles second siren winner against the Power in the course of a year. The Eagles trailed by 3 goals heading into the final term but the Power couldn’t hold them off as they failed to score. Tom Jonas, Ollie Wines, and Aidyn Johnson (3 goals) were best for the Power while Elliot Yeo, Scott Lycett, and Jamie Cripps (3 goals) were standouts for the Eagles. Luke Shuey also had 31 disposals.

Essendon defeated St. Kilda 122-79 to maintain their finals hopes, though they would need to win out to be in contention. The Bombers pulled away in the second half as Zach Merrett and Andrew McGrath went over 30 disposals. Anthony McDonald-Tipungwuti and David Myers were also massive, combining for 7 goals while Devon Smith laid 8 tackles. Best on ground for the Saints was Seb Ross while Jack Steele was also solid. Ross has been in tremendous form late in the season.

Hawthorn edged Geelong 71-60 to finish the round 4th on the ladder, while Geelong would currently miss finals in 9th. The Hawks held off a Cats comeback as Tom Mitchell all but locked down the Brownlow with another 30+ disposal game while Isaac Smith, Luke Breust, and Jack Gunston combined for 6 goals. Shaun Burgoyne, newly resigned, was also solid as the Hawks have to be in contention for a flag at this point. Gary Ablett, Patrick Dangerfield, and Sam Menegola were best for Geelong in a loss that stings.

Melbourne remained winless against top 8 sides in 2018 as they fell to Sydney 87-78. The win puts Sydney back into the finals discussion as Tom Papley booted 3 goals, while Nic Newman, Jake Lloyd, Josh Kennedy, and Isaac Heeney were all influential. Good games from Clayton Oliver and Angus Brayshaw weren’t enough for the Dees. Aaron Vandenberg kicked 3 goals.

A 92-85 win for the Western Bulldogs has (most likely) locked surprise packet North Melbourne out of finals. The Roos have been good enough against the better sides in the comp but they have collapsed against weaker sides they should beat. After a strong first half they fell apart in the second as the Dogs kicked 9 goals to 3 to nab the win. Lachie Hunter, Jack Macrae, and Caleb Daniel combined for more than 120 disposals while Marcus Bontempelli had 35. Tory Dickson booted 3 goals as well. North was led by Todd Goldstein, Ben Brown, and Ben Cunnington.

Collingwood got the job done against the Brisbane Lions 104-73. A strong second half ensures the Magpies remain in contention for top 4 as Taylor Adams posted 33 disposals and Jordan De Goey booted 4 goals. Jaidyn Stephenson was also solid for the Pies. Brisbane’s best were Eric Hipwood (3 goals), Dayne Beams, and Alex Witherden.

The GWS Giants sit in 3rd position after a 106-92 win over Adelaide. Despite Josh Kelly suffering a concussion the Giants won a competitive contest with Lachie Whitfield (30 disposals), Rory Lobb in the ruck, and Tim Taranto leading the way. Jeremy Cameron and 4 other Giants had 2 goals each. Matt Crouch, Josh Jenkins, and Brodie Smith were best for the Crows.

Carlton gets the wooden spoon this year after a 101-72 defeat against Fremantle. The Dockers dominated in the second half as Cam McCarthy booted 3 goals, and both Lachie Neale and Ed Langdon were over 30 disposals. Sean Darcy had 42 hitouts and 8 tackles as the ruck while replacement ruck Matthew Lobbe, Patrick Cripps, and Charlie Curnow were best for the Blues.