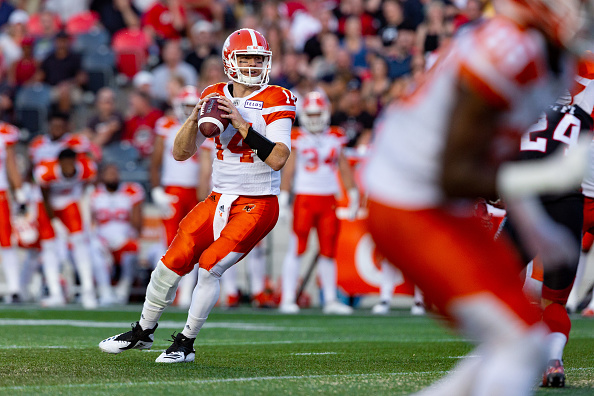 Week 9 is upon us, and with only six teams in action, you’ve got some difficult lineup decisions to make. Check out our Week 9 CFL Fantasy starts!

With so few teams in play this week, this looks to be the time to target a bargain at quarterback. Since taking over under centre for the Lions, Travis Lulay has averaged 37 attempts and 310 passing yards per game, more than enough volume for fantasy relevance. Edmonton has seen several defensive starters return from injury this week, and if B.C. is trailing early, that will necessitate a reliance on the passing game. While Lulay won’t be the highest scoring quarterback on the week, he should see more than enough volume to return value on his price and allow you to spend elsewhere.

The Ottawa Redblacks are massively favoured this week against the hapless Alouettes, and the biggest CFL Fantasy beneficiary should be William Powell. In what will surely be a favorable game script, Powell could see over 20 touches. Powell likely has the safest floor of all running backs this week and is well worth his price tag.

The Edmonton Eskimos have been a favorable matchup for running backs all year, and with Jeremiah Johnson and Brandon Rutley injured, Travon Van will have an opportunity to produce at a lower price point for fantasy players. The former Eskimo will share touches with Chris Rainey but has the skills to be both effective ball carrier and pass catcher. Van should have the first crack at any goal line work, and even if the score becomes lopsided, he will remain involved for pass protection and dump offs.

Montreal owns the worst pass defence in the league, and Greg Ellingson should produce this week in a winnable matchup. While Sinopoli has established himself as a premier pass catcher, Ellingson has quietly been consistent, comfortably leading the team in slotbacklabs.com’s Air Yard metric, (intended passing yards). He will see a ton of targets in a Redblacks offence that will be looking to exact a degree of revenge for their last-second loss to another Eastern opponent last week.

The Blue Bombers face the Hamilton Tiger-Cats in what Vegas expects to be the highest scoring game of the week. Weston Dressler is tied with Darvin Adams for the team league in targets but has a much more favorable matchup against Cariel Brooks. Dressler does not project to have an explosive ceiling but should have a very safe floor to match his modest salary. If Dressler finds the end zone, CFL Fantasy owners will feel like they stole him.