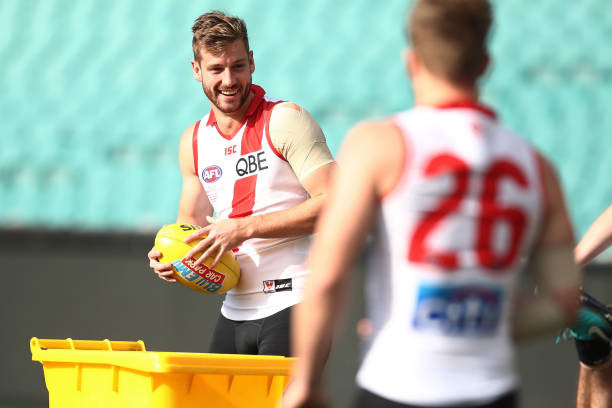 AFL round 20 starts Friday as the race for finals and the race for top 4 positioning is fully on. Here is your look at all the action.

Richmond vs Geelong (Friday at the MCG)

Richmond will be favored in this matchup, though a win for Geelong would really help them breathe easy for finals. The Tigers have dominated at the MCG and both teams outs equal out with Dion Prestia missing for the Tigers and Tom Stewart missing for the Cats. Geelong has the talent to win this but with what Richmond has been able to do at home I don’t see them falling in this contest. Tigers by 14

Hawthorn vs Essendon (Saturday at the MCG)

Essendon needs to win this game to make finals, while Hawthorn probably does. The Hawks won the matchup earlier this year but Essendon’s form has to give them cause for concern. Tom Mitchell looks set to win the Brownlow medal but Zach Merrett (in his 100th game) and the Essendon forward line looks set to cause trouble. I’ll back Devon Smith and company to score enough to outpace the Hawks. Essendon by 29

Brisbane vs North Melbourne (Saturday at the Gabba)

A game that now looks tough for North Melbourne, but they are still counting on it to make finals. The Lions have stood up late in the season despite consecutive losses while the Roos return Jarrad Waite but lose Shaun Higgins, a key midfielder, this week. Brisbane is a trendy pick but I’ll back North, they have more to play for and having made it this far I don’t see them coming up short here. North Melbourne by 9

Adelaide vs Port Adelaide (Saturday at the Adelaide Oval)

The Crows would love to spoil things for their rivals in the second Showdown of the season. Port won the first and has an unchanged side while Adelaide swaps out the likes of Paul Seedsman and Mitch McGovern this week while Tom Doedee returns. It’s been a poor season for Adelaide and given Port won this initial contest, I expect them to back it up and sweep the season series. Port Adelaide by 14

A forgettable game this week, both sides are simply playing for pride in this one and some of the players will be looking to stay listed next season. A host of changes were made by both teams with Nathan Freeman making his long awaited debut for the Saints. This match could go either way but the Saints have a bit more firepower and should take it. St. Kilda by 24

Sydney vs Collingwood (Saturday at the SCG)

Despite these sides only being separated by one win, the Pies are battling for top four, while the Swans have slipped from a finals position at this time. Sydney brings in Alex Johnson, Kieran Jack, and Jarrad McVeigh while Zak Jones and Heath Grundy are out. The Pies debut Jack Madgen but lose Jeremy Howe and Matthew Scharenberg this week. Sydney’s woes mean they are in trouble even at home, the Pies should have the advantage as Brodie Grundy will be in another massive performance. Collingwood by 17

Even with Tim Taranto and Dylan Shiel missing for this one, the return of Jeremy Cameron and Josh Kelly leading the side should be more than enough for the Giants to defeat the hapless Blues and continue their push for a top 4 finish. GWS will look to pad their percentage in this one. Giants by 40

Melbourne vs Gold Coast Suns (Sunday at the MCG)

Another game that looks to be a percentage padder for the favored side. The Dees are at home and previously dominated the Suns this season. The confirmed departure of Tom Lynch has added further stress on the Suns and with the likes of Steven May and Jarryd Lyons out this week this game could get ugly. Demons by 66

The last battle for the west this season, West Coast won the first one and another win would continue their security in a top 4 slot. Fremantle is playing for pride against their hated rival and would love an upset so they can build a bridge to next season. Liam Ryan and Dom Sheed returning should help the Eagles to another home win against their rivals at the new Optus Stadium. Eagles by 38