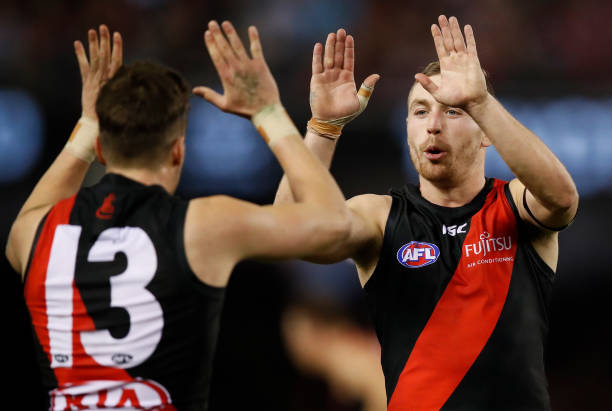 AFL Round 19 is in the books as Essendon, Melbourne, and North Melbourne claimed big wins to aid their finals hopes in round 19. Port Adelaide’s win also boosted them into the top 4. Here is your look back at all the action.

Geelong, Hawthorn, and Melbourne In The Top 8 With Wins

Fans of Victorian sides were generally happy on the weekend, among those sides Geelong, Hawthorn, and Melbourne remained in the finals positions with round 19 victories. The Cats turned in a dominant second half performance to defeat Brisbane 120-78. Tom Hawkins kicked 7 goals while Daniel Menzel and Jack Henry combined for 6 in the victory. Gary Ablett did what the Cats wanted when they acquired him in the offseason, posting 38 disposals in a pivotal game. Brisbane got a good outing from Dayne Beams again but only Daniel McStay had multiple goals (2).

Hawthorn was untroubled by Fremantle winning 112-53 and padding their percentage. Tom Mitchell and Jaeger O’Meara dominated from the midfield with more than 70 disposals between them while Luke Breust booted 4 goals. Lachie Neale was best on ground for an otherwise soft Fremantle side.

Melbourne put the ice on Adelaide’s finals hopes 90-77. Despite an early lead the Crows faltered in the third term and couldn’t come back despite a good game from Matt Crouch. Clayton Oliver and Tom McDonald were best for the winners, as Oliver continued his late season stride. Max Gawn dominated from the ruck as well, ensuring the Demons maintain the 6th position on the ladder.

North Melbourne and Essendon Remain Knocking on the Finals Door

North Melbourne took advantage of some late outs for the West Coast Eagles and won in Tasmania 81-41 off the back of a strong second half. The runaway win means North remains in touching distance of finals as Ben Cunnington and Paul Ahern were best on ground posting more than 35 disposals each. Ahern posted the game of his career while three Roos booted a pair of goals including Mason Wood. Elliot Yeo was best for the Eagles but they were poor going forward.

Essendon destroyed Sydney 109-66 in a game that didn’t turn out to be competitive. Dyson Heppell was the 30+ disposal man for the Bombers while four Bombers kicked a pair of goals including Devon Smith. Other than Jake Lloyd Sydney offered little as the likes of Buddy Franklin were stunted thanks to Michael Hurley and a great defensive outing for the men in black and red.

The Giants pulled away from the Saints 86-61 as the Giants core of Lachie Whitfield, Josh Kelly, and Stephen Coniglio were again best on ground. Harry Himmelberg booted 4 goals while Jacob Hopper added 8 tackles. Jarryn Geary, Jade Gresham, and Seb Ross were best for the Saints.

First place Richmond laid claim to the MCG crown as they completed a sweep of fellow MCG residents Collingwood 105-77. Shane Edwards, Dion Prestia, and Toby Nankervis were solid for the Tigers while Dustin Martin had 3 goals in a great team effort all around for the yellow and black. Scott Pendlebury, Steele Sidebottom, and Josh Thomas (4) goals were great for the Pies, while Brodie Grundy was excellent in the ruck for a side that remains third on the ladder.

The game didn’t mean much unless you were a Gold Coast or Carlton fan, but the Carlton Blues lifted to claim a 79-44 win against the side directly above them on the ladder. Carlton dominated the second half as Patrick Cripps continued his Brownlow chase, Marc Murphy and a young Paddy Dow were also excellent. Gold Coast couldn’t generate much attack despite a good game from Jarryd Lyons.